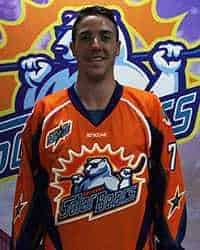 Orlando, FL – The Orlando Solar Bears, proud affiliate of the NHL’s Toronto Maple Leafs and AHL’s Toronto Marlies, unveiled the jersey the team will wear for the 2015 CCM/ECHL All-Star Classic, presented by Visit Orlando, and also announced the full schedule of events surrounding the All-Star game. Tickets for the All-Star Classic and FanFest go on sale tomorrow, Thursday, October 16, at 10:00 a.m. To purchase tickets, visit www.ticketmaster.com.

The Solar Bears All-Star Jersey (pictured at right) features a vivid orange jersey with the 2015 All-Star logo displayed prominently on the shoulders of the jersey. The All-Star Logo, along with the Solar Bears logo, was designed by Joe Bosack Graphical Design, one of the leading sports graphical designers in the United States. The overall design of the jersey was crafted by CCM Hockey, while Exclusive Pro Sports handled the lettering and numbering of the jerseys.

Along with unveiling the All-Star jersey, the Solar Bears recognized their All-Star committee, who have played an integral role in the planning and implementation of the events during the All-Star week in Orlando. Ricardo Rangel, Michon Walls, and Kristy Lemons from the 2014–15 All-Star Season presenting Sponsor Cricket Wireless were introduced, along with Orlando Mayor Buddy Dyer and Danielle Courtney of Visit Orlando. The Solar Bears also thanked Allen Johnson, Executive Director of Orlando Venues, Thomas Chatmon, Executive Director of the Orlando Downtown Development Board, John Bisignano, President and CEO of the Central Florida Sports Commission, and Jim Breig, representing Levy Restaurants in the Amway Center.

The week of events continues with the ECHL All-Star FanFest presented by Walgreens on Tuesday, January 20, 2015. The FanFest will include the Church Street Block Party with a DJ, inflatable games, Shades, and the Solar Bears Dancers, a Hockey Hall of Fame exhibit presented by Sutton Special Risk, player appearances, a MeiGray “History of Hockey” and memorabilia exhibit, and interactive games. In addition, a country concert featuring Madeline Smith, presented by Wealth by Design, will take place that evening.  In front of the Station 1 Firehouse local youth house leagues and travel hockey team players will team up with ECHL and Solar Bears All-Stars for an outdoor deck hockey exhibition. A limited number of FanFest and concert tickets will go on sale as both events are almost SOLD OUT. FanFest tickets will go on sale tomorrow, Thursday,October 16th, at 10:00 a.m. and the concert will go on sale in December.