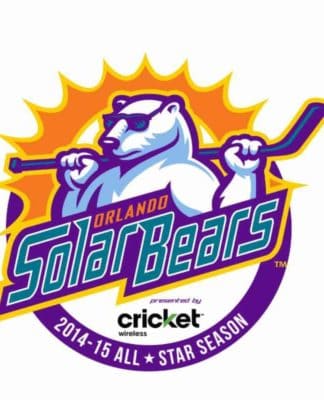 Orlando, FL – The Orlando Solar Bears, proud affiliate of the NHL’s Toronto Maple Leafs and AHL’s Toronto Marlies, announced today that they have traded D Mike Bergin to the Elmira Jackals for future considerations. In addition, G Garret Sparks has been placed on the 21-day IR.

Bergin agreed to terms with the Solar Bears on July 14, and played in each of the team’s preseason games in Estero, FL, in October. He did not appear in a regular season game with the Solar Bears. A native of Ottawa, ON, Bergin played four seasons (2008-12) at R.P.I. (NCAA) before skating for Sodertalje in Sweden for the past two seasons.

Solar Bears host the Greenville Road Warriors this weekend at the Amway Center on Saturday, November 8, at7:00 p.m. and Sunday, November 9, at 1:00 p.m. For tickets, click here.

Full and Half Season tickets are on sale now for the 2014-15 All-Star Season. Call the Solar Bears at 407-951-8200or visit OrlandoSolarBearsHockey.com for more information.

The Orlando Solar Bears, the ECHL affiliate of the NHL’s Toronto Maple Leafs and AHL’s Toronto Marlies, play all of their home games at the 2012 Street and Smith’s Sports Business Journal Sports Facility of the Year, the Amway Center.

Group tickets are a great way to entertain employees, co-workers, clients, friends and family. For more information on discounted group tickets and a list of group benefits, call 407-951-8200 or visit www.orlandosolarbearshockey.com/groups.

Since beginning operations in November of 2011, the Solar Bears have helped raise over $730,000 for the Central Florida community. To read the Solar Bears Report to the Community, click here.

Students of Color Need to See More People of Color.  That Shouldn’t Be Controversial.