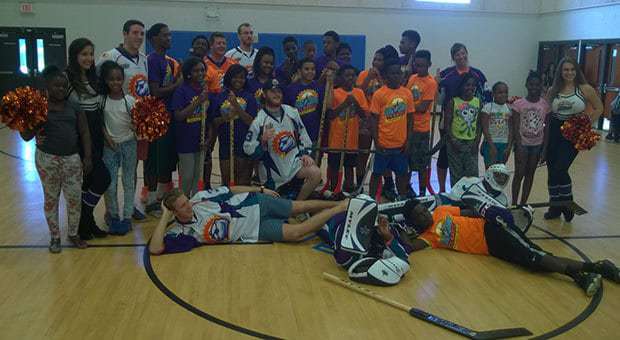 “One of the keys to molding our youth into successful adults is ensuring they are physically fit by giving them opportunities for an active lifestyle,” says Gary Cain, president & CEO, Boys & Girls Clubs of Central Florida. “We’re honored to partner with the Solar Bears to bring street hockey to our clubs and to our community and are looking forward to assisting them in growing this sport with our youth throughout the region.”

The Joe R. Lee Branch is the first of the Central Florida branches to receive donated street hockey equipment. Solar Bears players will be active in the future visiting the branch to teach their participating youth members the rules and fundamentals of hockey and to participate in their games.

“We are excited to work with the Boys & Girls Clubs and thrilled that the branch will add street hockey to their activity list,” said Orlando Solar Bears Chairman Joe Haleski. “By adding street hockey the kids will have another fun and exciting sport to play. This program is certainly in step with our mission to continue the growth of hockey in Orlando and all of Central Florida.”

A group of middle school aged kids from the Joe R. Lee Branch in Eatonville attended the Solar Bears game on Monday, March 9, to see professional hockey in action, and Solar Bears players will join the kids during each month of the regular season (this year and beyond) to teach new skills. The equipment donated by the Solar Bears includes sticks, nets, street hockey balls, and two full sets of goalie equipment.

The Solar Bears plan to expand the program to all branches of Boys & Girls Clubs of Central Florida in future seasons.

The Orlando Solar Bears, the ECHL affiliate of the NHL’s Toronto Maple Leafs and AHL’s Toronto Marlies, play all of their home games at the 2012 Street and Smith’s Sports Business Journal Sports Facility of the Year, the Amway Center.

Group tickets are a great way to entertain employees, co-workers, clients, friends and family. For more information on discounted group tickets and a list of group benefits, call 407-951-8200 or visit www.orlandosolarbearshockey.com/groups.

Since beginning operations in November of 2011, the Solar Bears and their fans have helped raise over $1,000,000 for the Central Florida community. To read the Solar Bears Report to the Community, click here.