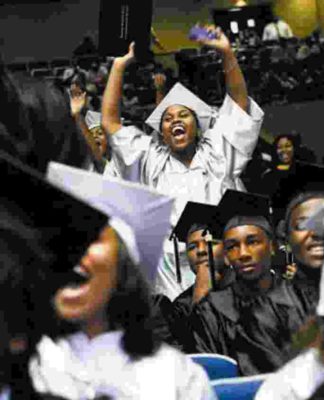 TALLAHASSEE, Fla. – High school graduation rates are up in Florida by almost five percent from 2011 to 2013, according to the 2015 Building a Grad Nation report.

While the new numbers put Florida in the top 10 in an increase of high school graduates, the state’s 75.6 percent graduation rate is still below the national average of 81 percent.

John Bridgeland, CEO of Civic Enterprises and co-author of the Building a Grad Nation report, says there are clear advantages to earning a high school diploma.

According to the report, for the third year in a row the U.S. remains on pace to achieve a national goal of 90 percent on-time high school graduation by 2020.

To increase the number of students graduating, the report recommends expanding the use of early-warning systems that can indicate a child needs intervention, and more equitable state funding so low-income and affluent students have the same opportunities.

According to the report, graduation rates increased nationally among low-income students over the past three years, but remain lower than graduation rates for middle and upper class students. Report co-author Robert Balfanz, co-director of the Everyone Graduates Center at Johns Hopkins University, says poverty is taxing on a student’s success, making it more difficult to attend and focus.

“They really need mentors and tutors and folks that can help nag and nurture,” says Balfanz. “To make sure if they’re not in school to call them to figure out ‘can we get you to school by 10 o’clock? What’s the issue and how can we solve it?'”

Will Black America make Major Strides toward Unity in 2016?