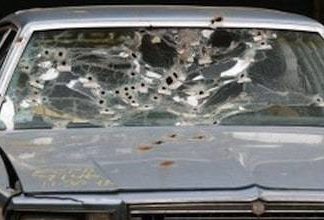 - Advertisement -
In 2012, Cleveland police Officer Michael Brelo stood on the hood of a car and shot 15 times at the unarmed black occupants inside.  This followed a barrage of bullets unleashed on the vehicle– 100 shots in 8 seconds– after the driver rammed into a police after a 22-mile chase.

CNN has reported that a judge ruled today that the officer involved– Michael Brelo– was justified.

It’s not clear if police ever determined whether the female passenger was guilty of anything other than being in the car.   Even if she had wanted to exit– something no one will ever know at this point– the car was traveling much too fast for her to get out.

Our every day experiences are different.  For years, whenever blacks complained about mistreatment at the hands of police, whites have almost universally replied: “police wouldn’t do that.”  Just because it never happens in your neighborhood doesn’t mean it doesn’t happen in ours, blacks responded in kind.

The videotaped shooting of Walter Scott by Officer Michael Sager, who attempted to plant his taser by the body to justify the killing, caused many to reassess what they believed about the possibility of police brutality.   I’ve personally seen white drivers stopped for traffic infractions tell officers where to go, how to get there, and to take no detours along the way.  Whites have no problem putting police officers “in their place” because they know that they are entitled to the privileges and protections afforded to them under the law.

Very few black men in their right minds would dare,  and those of us who would, know full well the risk we take.  We know that we are equally entitled to those legal protections, but we also know that a law enforcement officer is empowered to kill with absolute impunity, and the institutions responsible for protecting all of us will instead come together to protect each of them.

It’s a carry-over relic from the days of slavery, and from the old Dred Scott vs Sanford rule of law:  that “a black man has no rights that a white man is bound to respect.”  .

This idea of racial superiority is embedded in the very fabric of the institutions that for years embraced and enforced the slaves’ inferior status.  The practices, processes and procedures of these institutions were a reflection of their attitudes and beliefs.  The only difference between those days and these is that blacks and other ethnic minorities are now employed by these institutions.  Never lose sight of the fact that in carrying out the missions of these organizations, the employees– black, white, brown and yellow– are guided by the same prevailing attitudes and practices.   So, while they may not themselves be racist, their actions take on a racist tint because the attitudes and practices they are required to embrace and operate under are relics of a racist past.  Deference is given to whites, while no respect of any kind is shown to blacks.

Unfortunately, this is the history most blacks know all too well.    Our experiences are simply different from those of our white counterparts.  We know what we know according to our separate set of experiences.  But my many years of experience says to me in this situation that if the occupants of that car had been white, the crash at the end of the chase would have been met with an angry demand to “get out of the car.”  Not a hailstorm of bullets.

Ramming the police vehicle made it possible, however, for the judge to determine that the officers were in reasonable fear of their lives.  A car is, after all, a dangerous instrument.   If the driver ran because he was afraid, he should have run to the closest fire station.  Because after a hundred “legitimate” bullets, who can say that Officer Brelo did anything more than add insult to fatal injury.

Most importantly for me,  though, the actions of all the officers involved evidence a complete and total disregard for the live of the female passenger, who police didn’t care enough about to first determine if she was herself an innocent a kidnap victim, or someone in the car who was demanding to be let out.  They didn’t know– and didn’t care enough about her to find out.   She was just black, after all.

Roland is right. “Where are y’all?”