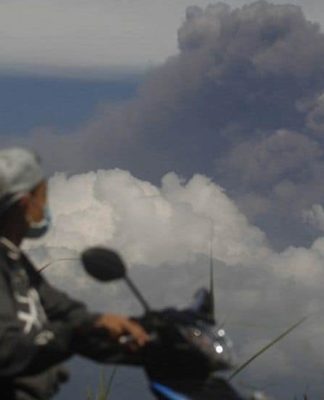 Ash spewing from two volcanoes in Indonesia has shut three more airports, which means five are now closed as millions head home for the Eid holiday.

The closures were sparked by eruptions at Mount Raung and Mount Gamalama.

Raung, which has been rumbling for weeks, led to airport closures last week including at tourist hotspot Bali – that has since reopened.

But thousands remain stranded at other airports including at Surabaya, Indonesia’s second biggest city.

On Thursday evening officials ordered shut the airports serving Surabaya and Malang in East Java – near Raung – and Ternate in North Maluku, near Gamalama.

Two other airports have remained closed since last week – Banyuwangi and Jember near Raung.

The eruption came on the eve of Friday’s Eid holiday, which marks the end of the Muslim holy month of Ramadan.

It is a major occasion in Indonesia, the world’s most populous Muslim-majority country, where many journey home to celebrate with their families.

Volcanic ash can be dangerous for airplanes as it can get sucked into engines and melts.

It could then turn into a kind of molten glass that coats the inside of engines and affects fuel flow, which can cause engines to shut off.

Why we should all cherish Serena

Creditor got a judgment against you? Read this.