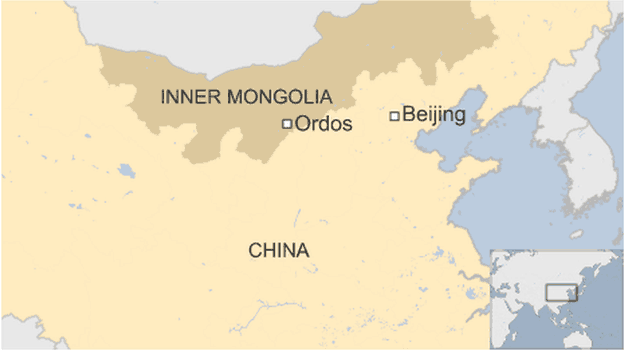 A group of foreigners, including nine Britons, detained in China are suspected of distributing “terrorist videos”, local officials have said.

Six of the Britons are being deported, the Foreign Office has said.

Three others and two people with joint UK-South African nationality are understood still to be in custody.

The 20-strong group was on a tour of ancient China when they were held on 10 July at Ordos in the Inner Mongolia region.

The Foreign Office has requested an explanation for the group’s detention.

Zhang Xi, an official in Ordos in charge of dealing with foreigners, said: “These people are suspected of watching and spreading violent terrorist videos and were arrested last Friday.”

They have been visited by the British consulate, the official added.

China Odyssey Tours, a travel agency based in China, has said the group was on one of its tours.

South Africa-based charity Gift of the Givers, which said it had been contacted by relatives of some of the tourists asking for help, has said that as well as the three Britons, five of those still being held were South Africans and one was Indian.

In a statement on its Facebook page the charity said the tour went “horribly wrong” when the party was arrested at Ordos Airport.

The charity said representatives from the British, South African and Chinese governments met on Tuesday to secure the release of 11 of the 20 people being held, but no formal charges had been put to any of those detained.