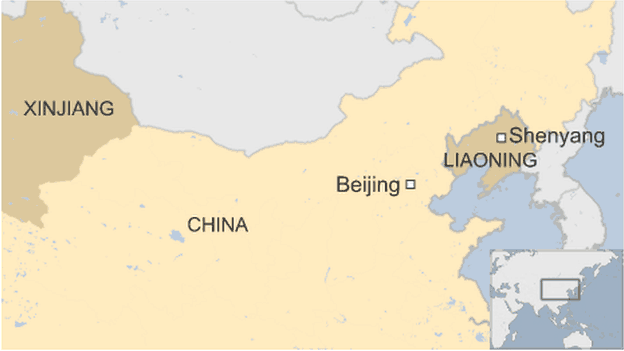 A woman was also injured in the raid which took place on Monday afternoon.

Xinjiang province, home to a significant Muslim Uighur population, has seen several clashes and public attacks in recent years, which police have attributed to terrorists.

Monday’s incident was one of the few such clashes outside of Xinjiang.

Several state media outlets quoted a statement posted on Monday night on micro-blogging site Weibo. The account is owned by the government of Liaoning province, whose capital is Shenyang.

The statement appeared to have been taken down by Tuesday morning. It remains unclear why it was removed, but China regularly censors online content deemed to be sensitive.

The statement, as reproduced in Chinese media, said that police caught 16 “terrorism suspects” in a raid in Shenyang.

During the raid, officers entered a rented apartment where they “discovered Xinjiang terrorist suspects” and were attacked by four people “wearing headgear, holding long knives, and shouting ‘holy war’ slogans,” the statement said.

Police then retreated and called for back-up. More than 200 officers, including an anti-terrorist unit, evacuated nearby residents and surrounded the building. A cherry picker was used to reach the seventh-floor apartment.

Pictures of the raid posted on a Weibo account owned by state broadcaster CCTV showed armed, uniformed men stationed on a rooftop and in a cherry picker cabin.

China has seen frequent reports of deadly clashes with police and public attacks in Xinjiang attributed to terrorism, but few incidents have been reported outside of the restive region.

In March 2014 a stabbing spree in Kunming city which killed 29 people was blamed on Xinjiang separatists, as was an October 2013 incident where a car ploughed into a crowd and burst into flames in Beijing’s Tiananmen Square.

Rights groups have accused China of persecution and torture of the Uighur minority, but China has rejected such claims.