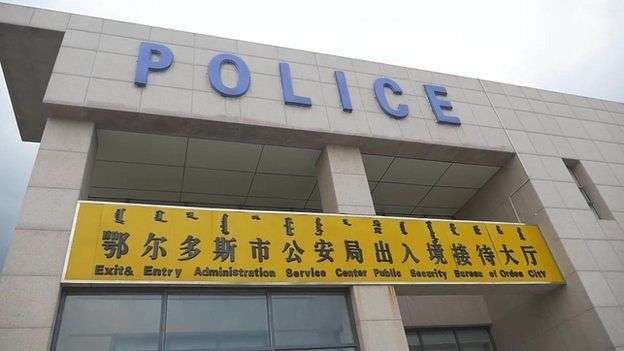 A misunderstanding about a documentary members of a tour to China watched in their hotel led to their arrests, says a spokesman for two of the party.

Three Britons arrived home on Saturday – the last of 20 UK, South African and Indian nationals to be deported since their detention in Inner Mongolia.

They are said to have watched a film about Mongol warlord Genghis Khan to help them get the most out of the trip.

But Chinese officials mistook it for a terrorist video, the spokesman claimed.

Police in the city of Ordos have declined to comment on the case but no charges were brought.

The UK embassy in Beijing confirmed that the three remaining Britons had now been flown home after spending a week at a detention centre.

The tour group members were arrested by police on 10 July at the airport in Ordos.

They were said to have been 30 days into a 47-day visit to the sites of ancient China.

Hoosain Jacobs, 74, and his wife Tahira, 68, from west London, were among the three Britons to return on Saturday.

Explaining the circumstances behind their arrest, a family spokesman said there had been an “unfortunate misunderstanding”.

He said they were held a day after visiting the Genghis Khan Mausoleum at Ordos.

The site was built in honour of the Mongol warrior-ruler, whose armies established an empire stretching across Asia and parts of modern-day eastern Europe in the 13th Century.

The tourists had watched the BBC documentary on Genghis Khan “to further their understanding of the region they were in at the time, and this may have mistakenly been deemed as ‘propaganda’ material”, he said.

The spokesman said: “While the experience was distressing in the first instance, they say they were looked after at all times and treated well.

“The group is a mixture of multi-faith men and women from Islamic, Christian and Hindu religions who knew each other well and had travelled the world together in the past, including Israel and the USA.”

He added: “It can only be assumed that junior officials who made the initial arrest in Inner Mongolia made a mistake, due to perhaps their unfamiliarity of the English language.

“The Jacobs family wish to thank the senior Chinese authorities in Beijing for the swift manner in which they have resolved this unfortunate misunderstanding.”

A Foreign Office spokesman on Friday confirmed officials had been informed that the final three British nationals were to be deported.

He added: “Our consular staff have visited the group and have received assurances from the Chinese government about their health and treatment.

“We are in regular contact with the Chinese authorities both in Ordos and Beijing.”