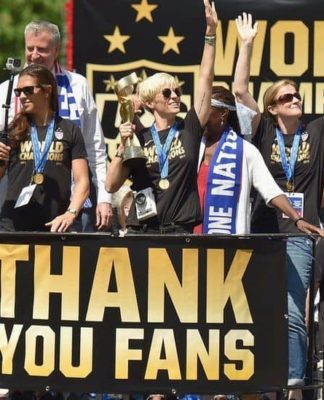 A rare ticker-tape parade in New York watched by thousands has honoured the US women’s football team, fresh from their victory at the World Cup.

Some onlookers took their places along the stretch of Broadway, the Canyon of Heroes, in the early hours.

Wearing star-spangled headbands and waving American flags, spectators cheered the players as they passed on an open-topped bus.

The US defeated Japan 5-2 on Sunday in Canada to win its third World Cup.

Watched by an average of 25.4 million viewers, peaking at 30.4 million, the game was the most-watched football match in US history.

Crowds were five or six deep along the route, with chants of “USA! USA!” ringing out.

“I’m glad to see girls getting a parade,” said nine-year-old Christinah Delesine, who wore a blue football shirt. “There should be more.”

John Comer had taken his young son and two daughters to the spectacle.

“I think it’s important the girls have role models,” he said. “It’s a chance to see women celebrated for doing something positive.”

One of the floats carried the tournament’s most valuable player, Carli Lloyd, who scored a hat-trick in the final.

New York Mayor Bill de Blasio, also in the parade, hosted the squad at a ceremony at City Hall after the procession.

He told the crowds: “When they bought home that trophy they also bought back a message about the power of women – about the strength of women; and about the need to create a more equal society for all.”

The last time the city honoured a team of national athletes was in 1984 after the Los Angeles Olympics.

Ten mistakes to avoid when working with tech partners

Pats fan has message from the grave: "Brady is innocent!"