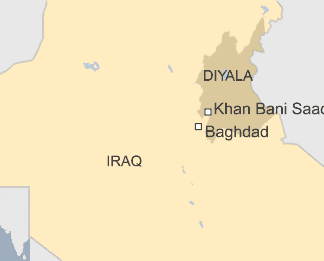 A car bomb has killed at least 40 people at a busy market in an Iraqi town, officials have said.

Some reports from Khan Bani Saad, near Baghdad, put the toll much higher. Children were among the dead.

The explosion came as people celebrated the end of the Muslim holy month of Ramadan. It was so powerful that it brought down buildings, police said.

The Islamic State (IS) group, who control swathes of the country, has said it was behind the attack.

A statement from the group said one of their members drove three tonnes of explosives into a crowd.

“Some people were using vegetable boxes to collect body parts of kids’ bodies,” he said.

IS militants are battling government forces in the north and west of the country.

The group captured parts of Diyala last year, and although it was later driven out it still has a presence there.

Just How Bad Is Our Drought?