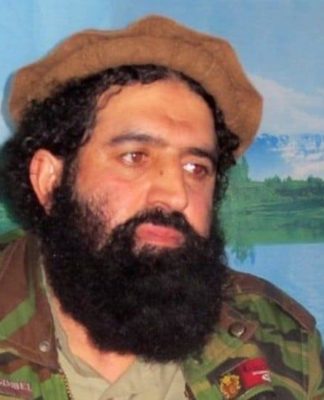 A third senior Islamic State (IS) commander was killed in a drone strike earlier this week in east Afghanistan, Afghan intelligence officials say.

Shahidullah Shahid was a former member of the Pakistani Taliban who defected to the IS group, they say. He is believed to have had several aliases.

There has been no independent confirmation of his death.

The BBC’s David Loyn in Kabul says that Shahid was a former spokesman for the Pakistani Taliban.

He was the most prominent of a group of fighters who appeared in a video in January, apparently filmed in Pakistan, pledging allegiance to the self-styled Islamic State.

Intelligence officials say that he was killed in the same drone strike on Tuesday which also killed another senior IS commander and scores of militants.

Our correspondent says that at least two other senior IS members in addition to Shahid have also been killed in drone strikes – showing that, while the remaining international forces in Afghanistan are not engaged in combat, they are taking seriously the reports of the emergence of the militant group.

The police chief of Nangarhar province confirmed on Thursday that Shahid had been killed in Tuesday’s drone strike. However there has been no word from Nato – the only force capable of launching drone attacks in the area.

Nangarhar has seen an upsurge of fighting in recent weeks, mostly between IS and the Taliban, forcing thousands of people to flee their homes.

The province borders lawless areas inside Pakistan, and is one of the areas where IS militants are most active in Afghanistan.

“[Shahid] wanted to expand IS’s operation in the country and with his death, it will have an impact on their activities,” Afghanistan National Directorate of Security spokesman Hasib Sediqi told Reuters.

He said that Shahid was killed along with Gul Zaman – another senior IS commander- and as many as 49 other IS militants in the Achin district of Nangarhar province, where they have recently gained ground after pushing back the Taliban.

Afghanistan’s spy agency, the National Directorate of Security, recently released a video on Facebook showing how its special forces were fighting against the IS threat.

IS first made its presence felt in Pakistan in April, when its regional spokesman claimed their fighters had shot dead three Pakistani soldiers.

Your Meekness is Your Weakness