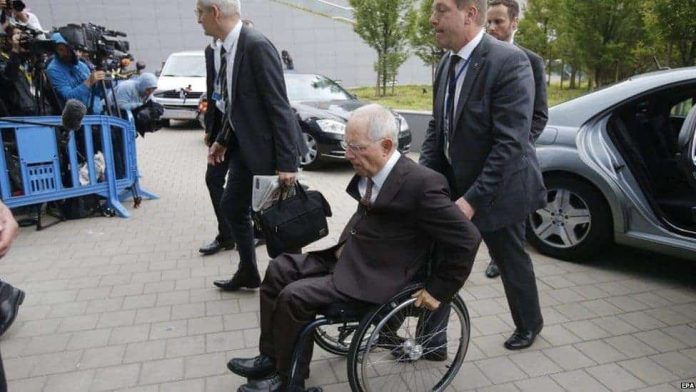 A summit of all European Union members planned for Sunday has been cancelled as “very difficult” talks over a third bailout deal for Greece continue.

Eurozone finance ministers adjourned the talks last night and will resume them shortly.

European Council president Donald Tusk said a meeting of Eurogroup leaders would go ahead at 14:00GMT and “last until we conclude talks on Greece”.

Without a deal, it is feared Greece could crash out of the euro.

“We have had an in-depth discussion of the Greek proposals, the issue of credibility and trust was discussed and also of course financial issues involved, but we haven’t concluded our discussions,” Mr Dijsselbloem, who heads the Eurogroup of finance ministers, told reporters.

“It is still very difficult but work is in progress.”

European Commission Vice President Valdis Dombrovskis said it was “utterly unlikely” a mandate would be achieved in Sunday’s meeting to start formal negotiations on the third bailout.

However, the amount of the new bailout could reach €74bn as Greece seeks a restructuring of its massive debt, which it says is unsustainable.

Of the €74bn, €58bn could come from the EU’s bailout fund, the European Stability Mechanism, with €16bn from the IMF, sources have said.

The Greek government last week set out a new list of austerity measures to try to secure the bailout – many of which had been rejected by the Greek people in a referendum last Sunday.

Greek Finance Minister Euclid Tsakalotos is attending the talks in Brussels, trying to convince his counterparts that his government can be trusted to push through their economic reform plan.