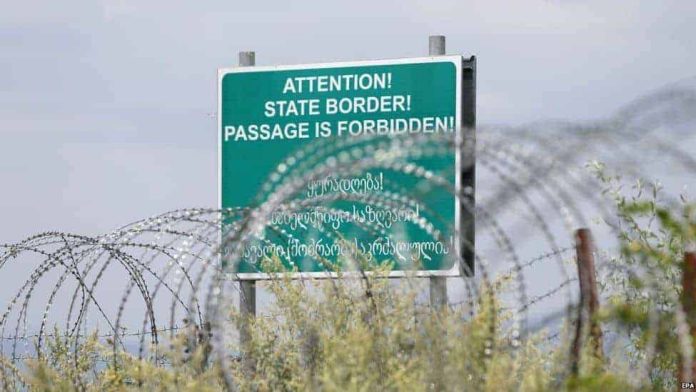 The EU has warned of increased tensions amid claims that Russia has redrawn a section of Georgia’s de facto border with South Ossetia.

The move has left a small portion of the Baku-Supsa oil pipeline under Russia’s effective control.

Russia has brushed off accusations about its role.

Its troops have been patrolling the administrative border since the 2008 Russian-Georgian war over South Ossetia.

An EU foreign policy spokesperson said the installation of new signposts “had led to tension in the area, with potentially negative effects on the local population, their livelihood and freedom of movement”.

“Steps that could be perceived as provocative must be avoided,” the office of EU foreign policy chief Federica Mogherini said in a statement.

“The EU reaffirms its full support for Georgia’s territorial integrity within its internationally recognised borders.”

Reports say markers have been placed at least 300m (980ft) further south into Georgian territory. The new border is now just 500m away from Georgia’s main highway linking the Black Sea to Azerbaijan.

It leaves a 1.6km segment of a BP-operated Baku-Supsa pipeline outside Georgia’s territory.

However, Georgia’s Energy Minister, Kakha Kaladze, and BP spokesperson Tamila Chantladze say BP has not had access to that section of pipeline since the 2008 war.

Ms Chantladze stressed that the pipeline was operating as normal.

Meanwhile a flag erected by Georgian protesters near the village of Khurvaleti, just south of the dividing line, has been removed by guards on the South Ossetian side, Georgia’s Rustavi-2 TV channel reported on Thursday.

In August 2008, tensions between Georgia and Russia escalated into a full-blown military conflict when Georgia tried to retake South Ossetia after a series of lower-level clashes with Russian-backed rebels.

In the aftermath of the war, South Ossetia declared independence from Georgia and was recognised by Russia, although only a few other countries followed suit.

In April 2009, Russia bolstered its position in South Ossetia by signing a five-year agreement to take formal control of its frontiers with Georgia proper.

There have been long-standing concerns that tensions over Russia’s influence in the region could have an impact on Georgia’s strategic infrastructure.