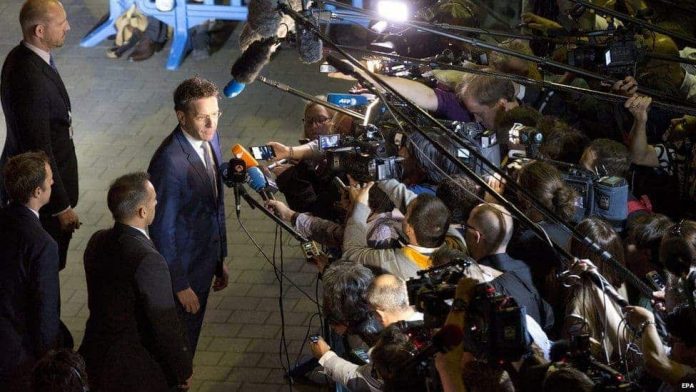 Eurozone finance ministers are due to resume crunch talks in Brussels on a bailout deal for Greece.

Ministers have expressed scepticism that Athens would implement austerity measures it has proposed.

They have little time to produce a working plan ready for European leaders who meet in Brussels later on Sunday.

“We have had an in-depth discussion of the Greek proposals, the issue of credibility and trust was discussed and also of course financial issues involved, but we haven’t concluded our discussions,” Mr Dijsselbloem, who heads the Eurogroup of finance ministers, told reporters as the earlier round of talks broke up.

“It is still very difficult but work is in progress.”

So a pause for breath overnight before finance ministers resume in the morning. No-one thought this would be easy.

They want more specifics from Greece – more on product and labour market reform, and possibly a commitment to pass specific reforms in the Greek parliament in the coming days.

But there are still much broader issues at stake – countries which think that the numbers being talked about represent far too much money to offer Greece in a third bailout.

And the divisions within the eurozone have become increasingly public.

Finland’s government appears to be in open revolt about a third bailout. Italy, on the other hand, is set to demand that a deal must be pushed through on Sunday for the sake of European unity.

On one issue all sides agree – this is not just about the future of Greece, it is about the credibility of the single currency.

Will a deal be reached?

Why did Greece hold a referendum?

Greek MPs have backed the latest measures proposed by Prime Minister Alexis Tsipras, despite the fact that many of the ideas were rejected by the Greek people in last Sunday’s referendum.

Greek Finance Minister Euclid Tsakalotos is attending the talks in Brussels, trying to convince his counterparts that his government can be trusted to push through their economic reform plan.

Before talks began on Saturday, Mr Dijsselbloem said there were concerns not just about “the content of the proposals, but also on the even more difficult issue of trust”.

“How can we really expect this government to implement what it’s now promising? I think it’s going to be quite a difficult meeting,” he said.

German Finance Minister Wolfgang Schaeuble said Greece would have to do more than promise reforms if it wanted more money.

“We will definitely not be able to rely on promises,” he said.

Reports on Saturday suggested that German ministers were drawing up a plan that would allow Greece to exit the eurozone temporarily if this weekend’s talks fail – something Athens says it is not aware of.

There were also unconfirmed reports that Finland had refused to agree to the new bailout proposals, although on its own it is unlikely to stop any deal going ahead.

How has austerity affected the eurozone?

Greece’s Economy Minister Giorgos Stathakis has told the BBC that his government is “committed to moving forward. Now we need to build trust”.

However, the amount of the new bailout could reach €74bn as Greece seeks a restructuring of its massive debt, which it says is unsustainable.

Of the €74bn, €58bn could come from the EU’s bailout fund, the European Stability Mechanism, with €16bn from the IMF, sources have said.

As talks drag on, Greece’s financial situation is close to collapse.

Banks have been closed for two weeks and a €60 (£43; $66) daily limit on cash machine withdrawals, imposed on 28 June, remains in force for Greek citizens.

The measures submitted in the new Greek document include: