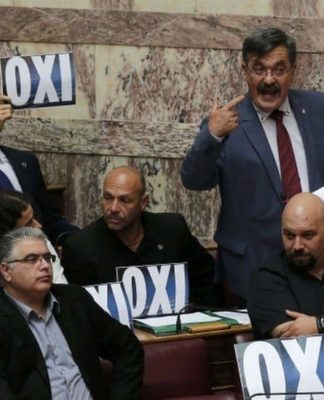 Eurozone finance chiefs are gathering in Brussels for a meeting that could decide whether new Greek proposals are sufficient to secure a third bailout and prevent a possible eurozone exit.

But he faced anger from some in his own party for proposing measures that were rejected in a referendum last Sunday.

Some creditors gave an initially positive reaction to the plans but a bailout agreement is far from certain.

The creditors – the European Commission, European Central Bank and International Monetary Fund – have sent a first joint assessment to the eurozone ministers.

“Under certain conditions, they jointly see the proposals as a basis for negotiation,” an EU official told Reuters.

Greece is asking creditors for €53.5bn ($59.47bn; £38.4bn) to cover Greece’s debts until 2018, but the amount of the new bailout could reach €74bn, as Greece is seeking a restructuring of its massive debt, which it says is unsustainable.

Punters are watching for their numbers on TV screens outside a betting cafe in central Athens. Next to broadcasts of motorbike racing, lottery draws and athletics, TV commentators give the latest on the debt crisis.

But George Vassis, 45, is not betting on the politics. “Who knows what will happen?” he asks. Like many here, he is weary after months of talks and economic decline.

He runs a business information company and wants an end to the current deadlock. “Something must be done. The measures the government is offering are bad, but it’s the only way to go forward.”

Mr Tsipras has faced backlash to his proposals, but for George much of the damage has already been done. His company will have to make redundancies either way – he is just waiting to find out how many.

Will a deal be reached?

Of the €74bn, €58bn could come from the EU’s bailout fund, the European Stability Mechanism, with €16bn from the IMF, sources said.

Greece’s creditors have already provided more than €200bn in two bailouts over the past five years. The second expired on 30 June, when Greece fell into arrears on an IMF loan.

A euro working group began a technical revue of the new proposals in Brussels on Saturday morning.

The 19 eurozone finance ministers will review the proposals afterwards and decide whether they form the basis for a new loan deal, and whether to supply Greece with interim funding.

There will then be a meeting of Eurogroup leaders in Brussels on Sunday afternoon, followed two hours later by a full meeting of EU leaders.

Although the new package has drawn support from the likes of France and Italy, the reaction from Germany, which is more exposed to Greek debt, has been more subdued.

One EU source told Agence France-Presse the new Greek plan stood only a “50-50” chance of approval on Saturday.

How has austerity affected the eurozone?

Without a deal, Greece risks crashing out of the euro.

Banks have been closed for two weeks now and a €60 (£43; $66) daily limit on cash machine withdrawals, imposed on 28 June, remains in force for Greek citizens. Many people say they have only been able to withdraw €50, as there are no smaller denomination notes.

The measures submitted in the new Greek document include:

Many of the ideas had previously been opposed by Mr Tsipras – and when put to the Greeks in a referendum last Sunday were soundly rejected.

The prime minister admitted that the package “entails many proposals that are far from our pledges, from what we feel is right for the recovery of the economy” and were only “marginally better” than proposals put forward by the creditors last month.

But he said: “It is a choice of high national responsibility, we have a national duty to keep our people alive… we will succeed not only to stay in Europe but to live as equal peers with dignity and pride.”

Mr Tsipras needed the support of the opposition to win the vote in parliament.

The BBC’s Mark Lowen in Athens says the package is a major climbdown for the prime minister.

The language of debt

Haircut: A reduction – or writedown – in the value of a troubled borrower’s debts. In 2011, Greece’s private lenders received a massive 50% haircut of what they were owed. At this stage the Greeks are being careful not to ask for debt haircuts.

Debt restructuring or rescheduling: Altering the terms of a loan in order to extend the repayment period. It may also mean dismissing part of the money owed. US Treasury Secretary Jacob Lew has said Greece’s creditors should restructure the country’s debt, but that such a move would not necessarily mean writing off a part of what Greece owes them. The IMF’s boss Christine Lagarde has also said Greece needs debt restructuring.

All Greek to you? Debt jargon explained

How easy is it to swap currencies?

Students of Color Need to See More People of Color.  That Shouldn’t Be Controversial.

Is there a scientific consensus on extreme weather?

Power Rangers: Why the Blueshirts' man-advantage is finally clicking