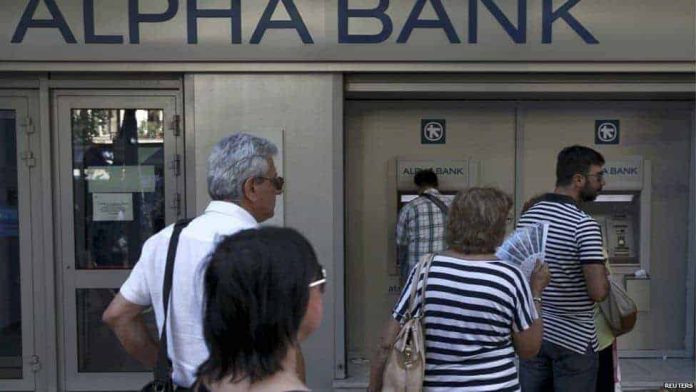 Greek banks are set to reopen after three weeks of closures sparked by the deadlock over the country’s debt.

Athens reached agreement with its international creditors last week, in a cash-for-reforms deal that helped Greece avoid exiting the eurozone.

But several restrictions remain in place, and Greeks also face price rises with an increase in Value Added Tax.

Meanwhile Germany has said it is prepared to consider further debt concessions to Greece.

Queues at ATMs have been a feature of life in Greece for weeks, with people waiting in line each day to withdraw a maximum of €60 (£41) a day, a restriction imposed amid fears of a run on banks.

From Monday, the daily limit becomes a weekly one, capped at €420 (£291), meaning Greeks will not have to queue every day.

While banks throwing opening their doors marks the return of some normality to the Greek economy, long-term problems remain.

Unemployment is stubbornly high, and as this chart shows, Greece’s recession is comparable to one of history’s most famous economic crashes.

How bad are things for the Greeks?

The scale of hardship

But a block on transfers to foreign banks and a ban on cashing cheques remain in place.

Greeks will also pay more on a range of goods and services, including taxis and restaurants, with VAT rising from 13% to 23%.

The VAT rise was among a package of reforms demanded by Greece’s creditors to open talks on the proposed €86bn (£60bn) bailout.

Members of Prime Minister Alexis Tsipras’s party rebelled against the austerity measures demanded by creditors when it was voted through parliament,

But it paved the way for Greece to receive a bridging loan, which enables the reopening of the banks and for Athens to repay debts to the European Central Bank and the International Monetary Fund due on Monday.

Both Greece and the IMF, have been arguing for a restructuring of its €320bn debt, saying its current position is “unsustainable”.

The German Chancellor, Angela Merkel, ruled out a “a classic haircut” – a markdown of Greece’s debts.

But she told ARD TV other forms of relief, such as extending maturities or slashing interest rates, could be considered once the details of the latest programme are worked out.

She also played down reports of a row with her Finance Minster Wolfgang Schaeuble, who suggested in an interview with Der Spiegel magazine he would rather resign than defend something he did not believe in.

“The finance minister will, like me, conduct these negotiations and I can only say that no one came to me and asked to be relieved,” said Ms Merkel when asked about the suggestion.

Germany, which is the largest contributor to Greek rescue funds, has taken a tough line on Greece.

At one point in the fought talks over the bailout Mr Schaeuble suggested Greece could temporarily exit the eurozone while it stabilises its economy.

Mr Tsipras, who has reshuffled his cabinet to replace rebellious ministers, has another set of reforms to push through parliament on Wednesday.

In a damning assessment, his former Finance Minister Yanis Varoufakis told the BBC the economic programme imposed on Greece was “going to fail”.