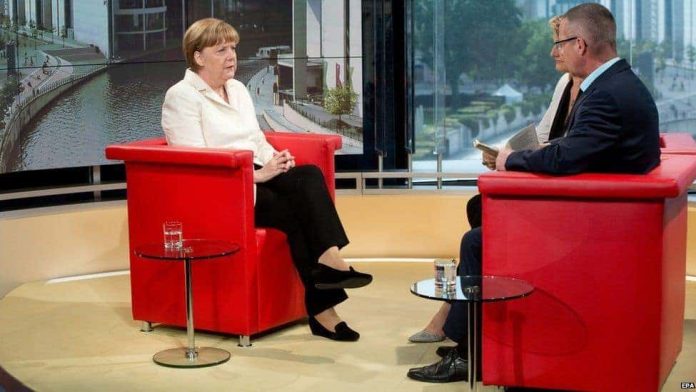 German Chancellor Angela Merkel says she is prepared to consider further debt concessions to Greece once its latest economic reforms are worked out.

In a television interview, she said she was open to discussing reduced interest rates and extended maturity dates.

But Mrs Merkel said this would happen only after details of the latest bailout had been agreed, and reiterated that there would be no debt write-off.

Meanwhile France’s president called for the creation of a eurozone government.

“What threatens us is not an excess of Europe but its insufficiency,” Mr Hollande wrote in a French newspaper.

The 19 countries that use the euro are members of an informal body, the Eurogroup, made up of each country’s finance minister.

The complex negotiations earlier this month over whether to grant Greece a third bailout exposed vastly different points of view between the various eurozone members.

Germany, which is the largest contributor to Greek rescue funds, has taken a tough line on Greece.

Both Greece and one of its key creditors, the International Monetary Fund, have been arguing for a restructuring of its €320bn debt, saying its current position is “unsustainable”.

Bailout deal at a glance

But Mrs Merkel said again on Sunday that “a classic haircut of 30, 40% of debt cannot happen in a currency union”.

“Greece has already been given relief. We had a voluntary haircut among the private creditors and we then extended maturities once and reduced interest rates,” she said in an interview with ARD TV to be broadcast later on Sunday.

“And we can now talk about such possibilities again… once the first successful review of the programme to be negotiated has been completed, then exactly this question will be discussed – not now, but then,” she said.

The €80bn (£57bn; $88bn) bailout deal agreed after some 17 hours of talks between eurozone leaders last week was conditional on Greece imposing tough new reforms of its taxes, pensions and labour market, as well as privatising key state assets.

The conditions – harsher than those proposed by the eurozone in earlier negotiations – angered many in Greece who called it a “humiliation”.

Greece had been given “a choice of being executed or capitulating”, its former Finance Minister Yanis Varoufakis told the BBC on Saturday.

Greek Prime Minister Alexis Tsipras himself said it was a deal he did not believe in but was the only way to “avoid disaster for the country” – and managed to get the necessary legislation approved by parliament on Wednesday.

As a result, the European Council has approved a €7bn bridging loan which will enable Greece’s banks to open on Monday, and enable Athens to repay debts to the European Central Bank and the IMF due also on Monday.

While Greeks will be able to withdraw €420 a week in one transaction, rather than just €60 a day, the limit will effectively remain the same.

Louka Katseli, head of Greece’s banking association, said: “Capital controls and restrictions on withdrawals will remain, in place but we are entering a new stage which we all hope will be one of normality.”