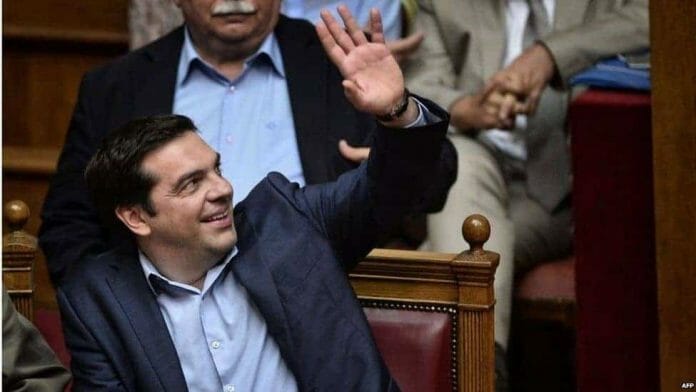 Greece has taken a crucial step towards a bailout after its parliament passed a crucial second set of reforms.

The passage of the measures means that negotiations on a €86bn European Union bailout can begin.

The reforms include changes to Greek banking and an overhaul of the judiciary system.

Thousands demonstrated outside of parliament as the bill was debated, with protests briefly turning violent as petrol bombs were thrown at police.

There had been fears of a rebellion by MPs but Greek Prime Minister Alexis Tsipras was easily able to must the support required. In total, the measures received 230 votes in favour and 63 against with five abstentions.

Among those who voted against were 31 members of his own Syriza party. However, this represents a smaller rebellion than in last week’s initial vote.

Former Greek Finance Minister Yanis Varoufakis was one of those rebels in the first vote who crossed to vote in favour this time.

Representatives of the European institutions that would provide the bailout funds will begin negotiations in Athens on Friday.

Last week, Greece passed an initial set of austerity measures imposed by its creditors. These were a mix of economic reforms and budget cuts demanded by the eurozone countries and institutions before bailout talks could continue.

This second set of measures passed early on Thursday morning were of a more structural nature, including:

More contentious measures – phasing out early retirement and tax rises for farmers – have been pushed back to August.

The emergency injection of an extra €900m (£630m), the ECB’s second in a week, came just hours before the vote.

The International Monetary Fund (IMF) confirmed on Monday that Greece had cleared its overdue debt repayments of €2.05bn and was no longer in arrears.

The repayments, which included €4.2bn to the ECB, were made possible by a short-term EU loan of €7.16bn.

Greece’s next major deadline is 20 August, when it must pay €3.2bn owed to the ECB, followed by a payment of €1.5bn to the IMF in September.

The protest in Athens’ Syntagma Square – called by Greece’s public sector union – was reported to have been largely peaceful, until a number of petrol bombs were thrown in the direction of police.

The BBC’s Piers Scholfield, tweeted from the scene that a small number of anarchists – no more than a few dozen – attempted to create a disturbance but the situation soon calmed down.