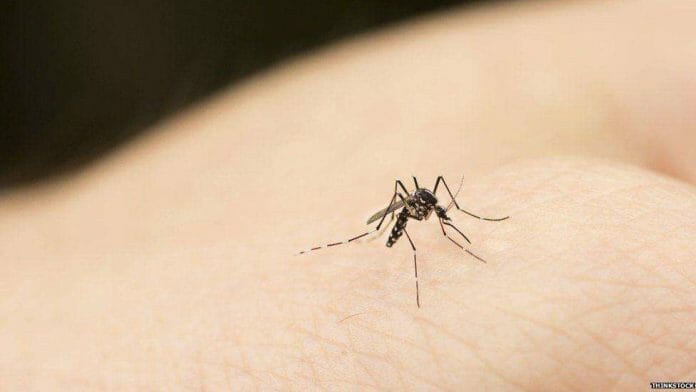 New research suggests that mosquitoes track down something to bite using a sequence of three cues: smell, then sight, and finally heat.

Biologists recorded the movement of hungry mosquitoes inside a wind tunnel.

The insects were instantly attracted to a plume of CO2, much like a human breath; after sniffing this gas they would also home in on a black spot.

Finally, over much shorter distances, the mosquitoes were also drawn towards warmth.

The findings, published in the journal Current Biology, build on previous evidence that smell is crucial for mosquitoes to pinpoint their next meal.

Body odour, for example, may play a role in how they choose one victim over another.

But mosquitoes are particularly good at sniffing out CO2, which is highly concentrated in the breath of the animals whose blood they feed on – like humans. Mosquitoes can home in on stale, exhaled air from up to 50m away.

It was also known that heat and vision could be important for attracting the blood suckers, but the new study is the first to unpick the distinct role of all three cues.

“We were able to put together a working theory for how all these senses work together in the mosquito, to find a human,” said first author Floris van Breugel, from the California Institute of Technology.

The key to the experiments was separating the different stimuli: smell, vision and heat. These were represented by a plume of CO2, a black spot on the floor of the wind tunnel, and a heated glass plate that was otherwise invisible.

“We were able to see how the mosquitoes’ reactions to each of those three stimuli interacted,” Dr van Breugel told the BBC.

For example, if the insects were presented with a black spot in an otherwise empty wind tunnel, they left it alone. But if the CO2 plume was there as well, they would sniff it out and then head for the visual stimulus.

“They only pay attention to visual features after they detect an odour that indicates the presence of a host nearby,” said Dr Michael Dickinson, the study’s senior author.

“This helps ensure that they don’t waste their time investigating false targets like rocks and vegetation.”

All together, the team developed a three-stage picture of the mosquitoes’ hunting strategy:

From the perspective of the mozzies’ human victims, this three-pronged approach is “annoyingly robust”, Dr van Breugel said.

“The unfortunate conclusion is that it’s very difficult to escape mosquitoes.

“If you were able to capture all the CO2 that you were breathing out, then it’d be less likely that a mosquito would find you. But then if you were in a group of people, and somebody else wasn’t taking those precautions, then a mosquito would follow their CO2 plume. And it may end up finding you before it finds your friend.

“So you’d want to be visually camouflaged [as well]. The more of those sensory cues that you disrupt, the less likely they are to find you and bite you.”

The best tactic, he added, might be to create a distraction.

“You could also take your friend and convince them to wear a high-contrast shirt.”