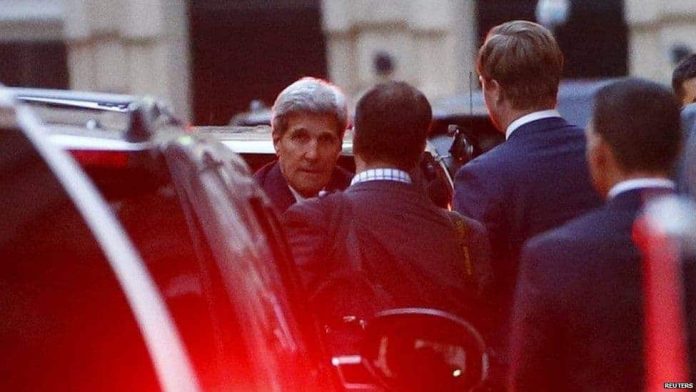 Talks in Vienna aimed at reaching a deal on Iran’s nuclear programme have made progress but some issues remain unresolved, the White House has said.

Six world powers including the US, Russia and the UK have been negotiating with Iran about scaling down its nuclear activities.

It is hoped that Iran will agree to do so imminently in return for the lifting of some economic sanctions.

The latest deal deadline on Monday night passed with no announcement.

There are contrasting assessments about the possibility of an agreement as hopes of a breakthrough rose and then receded throughout Monday.

Diplomats familiar with the talks told the Associated Press news agency that an announcement of a deal could be approaching because of the need of top officials involved in the negotiations to leave Austria’s capital on Tuesday morning.

However, the White House cautioned that significant issues remained unresolved and that Iran still had some tough decisions to make. even though “genuine progress” had been made and the US negotiating team was prepared to stay in Austria as long as there was a chance of success in the talks.

“They’re not going to sign an agreement until all of our concerns have been addressed. And as long as they continue to make progress in doing that, then the talks will, will continue,” White House spokesman Josh Earnest said.

Iranian FM Zarif said that while a breakthrough was imminent, there would be no deal before Tuesday.

The so-called P5+1 – the US, UK, France, China and Russia plus Germany – want Iran to scale back its sensitive nuclear activities to ensure that it cannot build a nuclear weapon.

Iran, which wants crippling international sanctions lifted, has always insisted that its nuclear work is peaceful.

The BBC’s James Robbins in Vienna says the clocks are running exceedingly slowly in the negotiations.

All the key ministers seem close to exhaustion, sending out conflicting signals on the timing of an agreement, our correspondent adds.

Mr Zarif wrote on Twitter: “If #IranDeal reached, triumph of diplomacy means we all will have won when we all could have lost. Plain and simple; no spin needed.”

China’s Foreign Minister Wang Yi meanwhile stressed that no deal should be expected to be perfect.

Could US Congress torpedo a deal?

“The conditions are already in place for a good agreement. We believe there cannot and should not be a further delay in the negotiations,” he said.

Iran’s President Hassan Rouhani had been scheduled to address the nation about the nuclear talks on television on Monday night, but the official Irna news agency subsequently reported that he would only speak when agreement had been reached.

The president’s English-language Twitter account later deleted a post that appeared to have been written in anticipation of a breakthrough. “#IranDeal is the victory of diplomacy & mutual respect over the outdated paradigm of exclusion & coercion. And this is a good beginning,” it said.

On Monday morning, negotiators were reported to be putting the finishing touches to a 100-page accord that included five technical annexes and planned to wrap up the negotiations by midnight, the latest in a series of self-imposed deadlines.

Diplomats told the Associated Press that they included the International Atomic Energy Agency’s investigation into the possible military dimensions of Iran’s nuclear programme, as well as Iranian demands that a UN arms embargo be lifted and that its nuclear activities not be described as illegal in any UN Security Council resolution approving the deal.

If a long-term agreement is reached, it still faces a tough ride through the US Congress, which could reject it and leave US sanctions against Iran in place.

Whenever the talks do finally end, our correspondent says, any deal will be a historic commitment and have the potential to open up not just global trade with Iran but also a new dialogue aimed at far greater co-operation against a shared enemy – the jihadist group, Islamic State (IS).