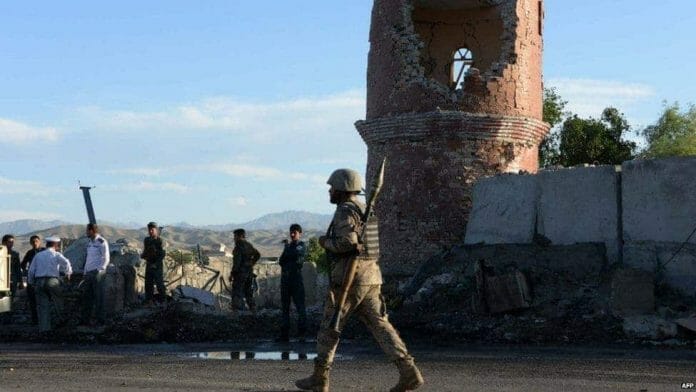 Hafiz Saeed, the leader of the Islamic State group in the Afghanistan and Pakistan region, has been killed in a drone strike, the Afghan intelligence agency says.

Saeed was killed in the strike in Achin in Afghanistan’s eastern Nangarhar province on Friday night, it said.

Some 30 other IS militants were killed, the agency said. There has been no independent verification.

A drone strike on Tuesday reportedly killed another top IS figure.

The Afghan intelligence agency, the NDS, said Friday’s strike was carried out by US-led coalition forces in coordination with intelligence provided by the spy agency.

Nato forces have had a new mandate since the start of the year but can still carry out drone strikes.

There has been no response from Islamic State on the reports and the Afghan government has given no official confirmation.

An NDS spokesman has told the BBC that this attack, combined with Tuesday’s strike, will have a significant impact on security for Afghanistan.

This is only third time that US-led forces have agreed to use drones against IS in Afghanistan, says the BBC’s David Loyn in Kabul, showing the seriousness which both the government here and the international coalition are taking the threat of the organisation taking root in Afghanistan.

There had been reports in April that Saeed, also referred to as Hafiz Saeed Khan, was killed while planting a bomb.

Nangarhar’s Achin district is close to the border with Pakistan. The Islamic State group refers to the Afghanistan-Pakistan region as Khorasan state.

Nangarhar has seen an upsurge of fighting in recent weeks, mostly between IS and the Taliban, forcing thousands of people to flee their homes.

The province is one of the areas where IS militants are most active in Afghanistan.

Tuesday’s strike reportedly killed Shahidullah Shahid, a former member of the Pakistani Taliban who defected to the IS group.

Again, there has been no independent confirmation of his death.

He was the most prominent of a group of fighters who appeared in a video in January, apparently filmed in Pakistan, pledging allegiance to the self-styled Islamic State.

Another IS militant commander, Mullah Abdul Rauf, was reported killed in a drone strike in February.

The NDS recently released a video on Facebook showing how its special forces were fighting against the IS threat.

IS first made its presence felt in Pakistan in April, when its regional spokesman claimed its fighters had shot dead three Pakistani soldiers.