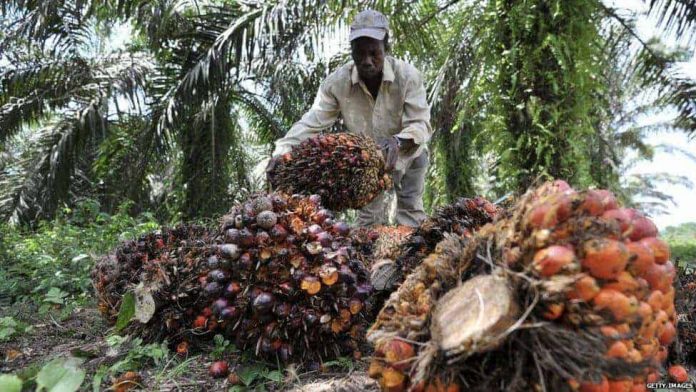 Communities in Liberia are being pressured to sign away their land to make way for palm oil plantations, according to a campaign group.

Global Witness says Liberians have been beaten and arrested for refusing, and wants a government investigation.

The group says that the company behind the plantations, Golden Viroleum (GVL), ramped up land clearances during the recent Ebola outbreak.

GVL says it only signed pre-existing agreements during the outbreak.

Palm oil is a multi-billion dollar global industry, almost every major food manufacturer uses it in their products.

The oil has become a cornerstone of Liberia’s development and the country is emerging as a new frontier market for what has become the world’s cheapest oil.

Global Witness says GVL dramatically expanded its operations in Liberia at the height of the Ebola outbreak last year, clearing thousands of acres of land while community support groups were busy dealing with the crisis.

GVL said in a statement that the agreements signed with landowners during the Ebola crisis “were the culmination of extended engagement with the communities which began many months and in some cases years before the start of the Ebola outbreak”.

The company claimed that communities “feared that GVL may abandon Liberia because of the crisis” and so it “made a conscious decision” to maintain operations.

In the report, Global Witness calls for legislation to be passed recognising “that rural communities own their land”.

In May, there were violent protests at a GVL plantation. Protestors in the south-east of the country reportedly took several people hostage before they were freed by police.