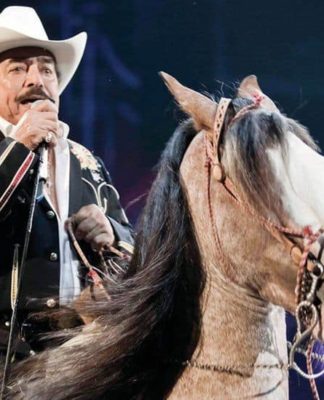 Mexican singer-songwriter Joan Sebastian, a leading figure in the Latin music world, died on Monday. He was 64.

He had bone cancer.

Joan Sebastian was known for his sentimental love songs, which he often performed on horseback.

After a childhood of poverty in rural Mexico, he decided to dedicate his life to music and went on to have a series of hits, which won him five Grammy awards and seven Latin Grammys.

He passed away at his ranch in Juliantla, in the western Mexican state of Guerrero.

Born Jose Manuel Figueroa he was often referred to as “The People’s Poet” for his lyrical compositions about love and betrayal.

He said he realised he wanted to become a singer at an early age, leaving the Catholic seminary where he was training to become a priest to pursue his musical ambition aged 17.

He was a fan of Mexican bull riding (jaripeo) and often performed at rodeo events, earning him the nickname of King of Jaripeo.

He released more than 50 albums in his career mixing Mexican ranchera music and Latin pop.

Among his most famous songs are Tatuajes (Tattoos) and Secreto de Amor (The Secret of Love).

His popularity extended to much of Latin America and the United States.

At the height of his fame he also starred in the Mexican soap opera Tu y Yo (You and Me) along with his former wife, Maribel Guardia.

He had eight children with a number of different women.

Two of his sons were killed.

One was shot dead as he tried to control the crowd after one of his father’s concerts in Texas, the other was killed in a fight outside a nightclub in the Mexican city of Cuernavaca.

Joan Sebastian was first diagnosed with bone cancer in 1999.

He continued to perform until 2014, when he announced during a performance in Zacatecas that he was again receiving treatment for a recurrence of the cancer.

Is Precast Concrete the Key to Rebuilding Our Infrastructure?