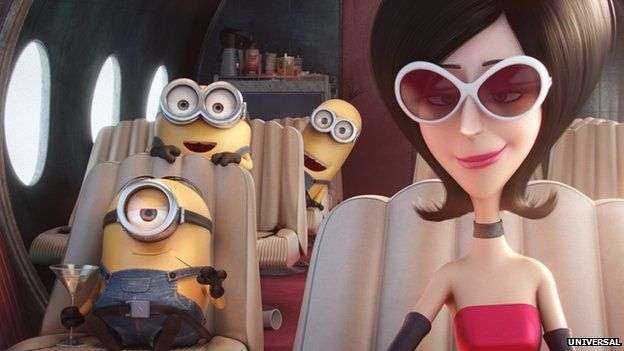 Despicable Me spin-off Minions topped the US and Canada box office in its opening weekend, with the second-biggest debut for an animated film.

Disney Pixar’s Inside Out took $17.1m in its fourth week in US cinemas.

Minions, which features the voices of Sandra Bullock and Jon Hamm, puts the spotlight on the babbling yellow, pill-shaped servants from the two Despicable Me films as they search for a new master.

Directed by Peter Coffin, who also voices the Minions, it topped the box office in 29 of the other 30 countries where it opened, according to box office tracker Rentrak, including France, Mexico and Russia.

“Given that they seek to work for the most evil people on the planet, they give off this incredible happiness,” said Universal’s Duncan Clark on the Minions’ success.

“I think the quality they’re proving to have is a common denominator appeal across all cultures.”

Universal is planning to release Despicable Me 3 in the summer of 2017.

Several other new films debuted in the top 10, including ad-libbed high-school horror movie The Gallows, in fifth place with $10m.

Sharing the hand-held camera technique made famous by 1999’s The Blair Witch Project, the film comes from the production company behind the Paranormal Activity and Insidious franchises.

Ryan Reynolds’ new sci-fi thriller Self/less – about a near-death billionaire who transmits himself into a younger body – was at number eight with $5.4m.