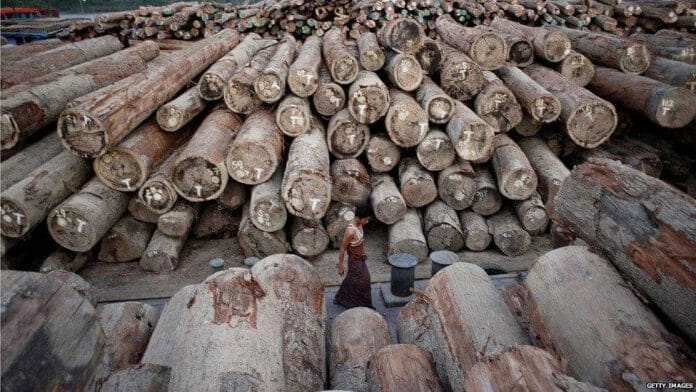 A court in northern Myanmar has sentenced 153 Chinese nationals to life in prison for illegal logging.

The group were arrested in January in Kachin state, close to the Chinese border, during a military operation to crack down on illegal logging.

Two 17-year-old boys were also given 10-year jail terms, and a woman in the group was given an additional 15 years for drug possession.

China has expressed concern about the severity of the sentences.

Foreign ministry spokesman Lu Kang said China had repeatedly raised the issue with Myanmar since the arrests of the group, who it says had been tricked into carrying out the logging.

It was asking Myanmar to “consider the actual situation of those loggers and deal with the matter in a lawful, reasonable and sensible way”, China’s Xinhua state news agency quoted Mr Lu as saying.

The military-backed civilian government, which came to power in 2011, has been trying to rein in the industry, and last year banned the export of raw timber.

But critics say illegal loggers are often able to make deals with the warlords who operate in remote regions close to the border.

The Chinese group were arrested during an operation against illegal logging allegedly sanctioned by the Kachin Independent Army, an ethnic rebel group active in the area.

The rebels denied their involvement.