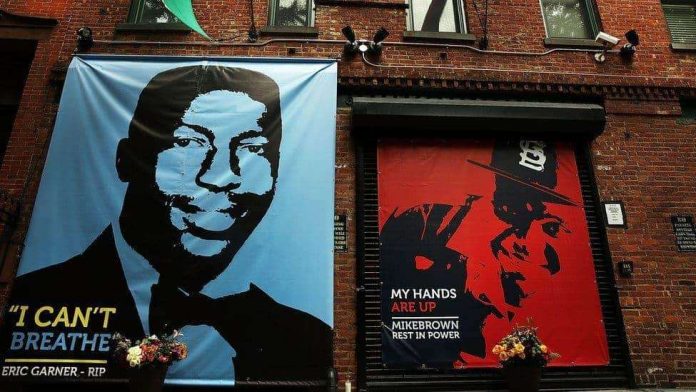 New York City has agreed to pay $5.9m (£3.8m) to the family of Eric Garner who died after a violent arrest.

The arrest was captured on video and Garner’s words “I can’t breathe” became a slogan for protesters nationwide.

Garner’s death was one of a number of controversial cases in the US where unarmed black people have been killed by white police officers.

After Garner argued with police and refused to be handcuffed, officer Daniel Pantaleo put Garner in a neck hold. Garner, who had asthma, was wrestled to the ground and restrained by force. He died later at a local hospital.

“Following a judicious review of the claim and facts of this case, my office was able to reach a settlement with the estate of Eric Garner that is in the best interests of all parties,'” New York City Comptroller Scott Stringer said on Monday.

New York City did not admit to any liability. Mr Stringer has spearheaded efforts to settle civil rights case quickly, saying it saves the city money on legal fees.

The city’s medical examiner’s office found that Garner’s death was a homicide and was caused by “the compression of his chest and prone positioning during physical restraint by police”.

Critics said Mr Pantaleo performed a chokehold on Garner, which is banned by police department policy. Mr Pantaleo claimed the hold was a legal manoeuvre.

A grand jury declined last December to charge the arresting officers, setting off weeks of protests. A federal investigation into the case continues.

Garner’s family plans to lead a rally pushing for federal charges against the officers on Saturday outside the Brooklyn offices of the United States attorney for the Eastern District of New York.

The Garner family and the Reverend Al Sharpton also plan to hold a news conference about the case on Tuesday.

“This is not about people getting money,” Mr Sharpton told the New York Times. “This is about justice – we’ve got to restructure our police departments – and how we deal with policing nationwide.”