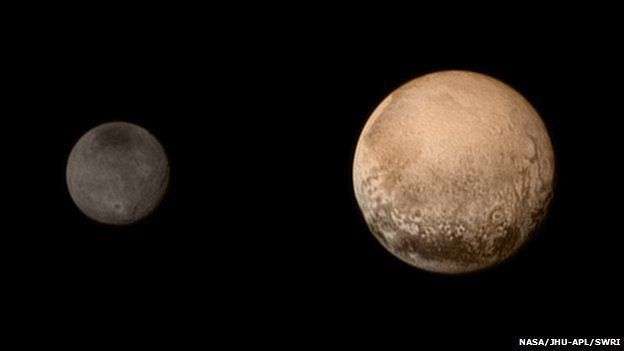 Nasa’s New Horizons spacecraft has begun the most intense period of its encounter with Pluto.

The probe is set to hurtle past the dwarf world on Tuesday, grabbing a mass of pictures and other science data.

Controllers got a last health status report, before the robotic craft turned its antenna away from the Earth to concentrate on its target.

Only when New Horizons has its trove of images safely in its onboard memory will it call home again.

This is not expected to happen until just after midnight (GMT) into Wednesday.

It means there will be a long, anxious wait for everyone connected with the mission, as they hold out for a signal that will be coming from almost five billion km away.

New Horizons’ flyby of 2,370km-wide Pluto is a key moment in the history of space exploration.

Its successful execution will complete the initial reconnaissance of the “classical” nine planets in our Solar System.

It will mark the fact that every body in that system – from Mercury through to Pluto – will have been visited at least once by a space probe.

New Horizons has been returning a steady stream of information on approach to the dwarf word in recent days, but this will be as nothing compared to the huge number of observations it plans to acquire when passing just 12,500km from the surface.

The probe will investigate not only Pluto but also its five moons: Charon, Styx, Nix, Kerberos and Hydra.

To achieve that, it must perform a furious set of manoeuvres as it points every which way in the sky to get the images and other types of data it needs.

“I can’t wait to get into the data and really start making sense of it. Right now, we’re just standing under the waterfall and enjoying it,” New Horizons’ principal investigator, Alan Stern, told BBC News.

Just getting the probe in position to make the flyby has been a monumental feat.

Because the observations are all run on an automated command sequence, New Horizons must fly a perfect path past Pluto, and with perfect timing – otherwise its cameras will shoot empty sky where the dwarf or its moons are expected to be.

This has necessitated aiming New Horizons at a “keyhole” in space just 100km by 150km (60miles by 90 miles), and arriving at that location within a set margin of 100 seconds.

All this has been achieved after a multi-billion-km flight across the Solar System lasting nine and a half years.

The mission team will not celebrate until New Horizons contacts Earth again, which should happen at 00:53 GMT Wednesday (01:53 BST).

This communication will contain only engineering information on the status of the probe, but controllers should be able to tell very quickly whether the flyby sequence worked properly or not.

The first high-resolution pictures from the pass should be downlinked later on Wednesday.

There is a very small possibility that New Horizons could be lost as it flies through the Pluto system.

Any stray icy debris would be lethal if it collides with the spacecraft at its 14km/s velocity (31,000mph).

As an insurance policy, the mission team therefore downlinked one last set of data from all seven of the probe’s instruments on Monday.

This included a final full-frame picture of Pluto before the approaching dwarf filled the entire field of view. This image is expected to be released by Nasa on its website at the moment of closest approach on Tuesday.

On Monday, the New Horizons team announced a new, more precise measurement of Pluto’s diameter at 2,370km. The probe sees the girth of Charon to be very similar to earlier estimates, at 1,208km.

Nix is estimated to be about 35km across, and Hydra about 45km in diameter. Kerberos and Hydra are a lot smaller, but New Horizons has not yet been able to make a good determination of their size. This will come from the flyby data.

The BBC will be screening a special Sky At Night programme called Pluto Revealed on Monday 20 July, which will recap all the big moments from the New Horizons flyby.