Pope ‘did not chew coca’ in Bolivia 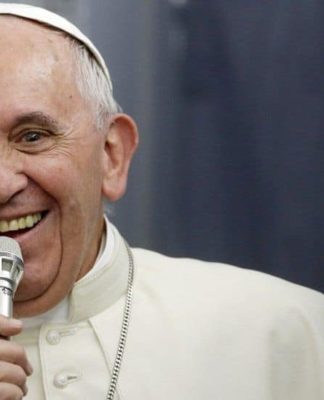 Pope Francis has said he did not chew coca during his recent trip to Bolivia.

The Bolivian authorities earlier said the pontiff had requested to chew coca to help him cope with the effects of the high altitude in La Paz.

The Pope made the remark when questioned by a journalist as to the secret of his energy during his South American tour, which ended yesterday.

Pope Francis said that mate, the traditional tea popular in his native Argentina, helped to keep him going.

“You wanted to ask me what is my drug of choice? Well, mate helps me. But I haven’t tried coca, I want to make that clear,” said the Pope during the flight from the Paraguayan capital, Asuncion, to Rome.

Coca leaves, which are the raw ingredient for cocaine, are used legally for medical and religious purposes in Bolivia.

The leaves are chewed or brewed in teas and work as a mild stimulant, helping also to alleviate nausea caused by high altitudes.

The pontiff returned to Rome this morning after an eight-day trip to Ecuador, Bolivia and Paraguay, some of Latin America’s poorest countries.

The pontiff’s visit to Bolivia was marked by controversy when Mr Morales gave him a crucifix sculpted in the shape of a hammer and sickle.

The Pope looked visibly surprised and it was rumoured that the crucifix had been left behind in Bolivia.

But Pope Francis has now clarified that he took it back with him to the Vatican.

The crucifix was based on a design by Luis Espinal, a Jesuit Priest assassinated in 1980 by right-wing militia.

“It was a surprise indeed. I didn’t know that Father Espinal was also a poet and a sculptor,” he said.

“He was killed in 1980, a time when the [Catholic Church’s] Liberation Theology embraced so many different groups and one of them adopted Marxist views.”

Pope Francis also shared his views on the popularity of selfies:

“Today a policeman, a man in his forties, asked to take a selfie with me. I told him: But are you a teenager?

“It is a different culture. I respect it but I feel like a great-grandfather,” said Pope Francis.