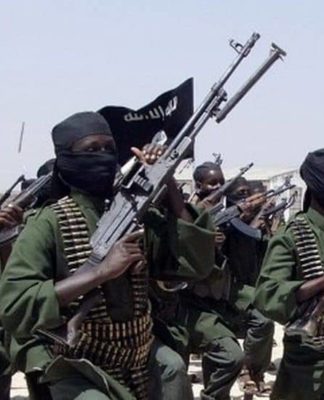 At least two senior commanders from the Islamist militant group al-Shabab have been killed in a drone strike in south-west Somalia, residents say.

Several loud blasts were heard in the town of Bardere at dawn and the bodies were found later, they said.

There has been no official confirmation from the al-Qaeda-linked group, but a source told a BBC reporter that those killed were al-Shabab commanders.

Bardere is one of the few towns still controlled by al-Shabab.

African Union and Somali government troops are reported to be advancing on the area in Gedo region.

The US has killed several senior members of al-Shabab in drone strikes in the past.

The BBC’s Moalimu Mohamed in the capital, Mogadishu, says the telecommunications network to Bardere has been cut off since the attack, but residents in the village nearest the town have been contactable.

They said that after the blasts, well-armed al-Shabab fighters rushed to the scene in Bardere, near the Juba River about 460km (285 miles) west of Mogadishu, where the dead men were found.

The names of the commanders believed to have been killed are Ismael Jamhad and Jama Dere, a Somali military officer travelling with the African Union troops in the area has told the BBC.

Somalia has seen clan-based warlords, rival politicians and Islamist militants battle for control since the fall of long-serving ruler Siad Barre in 1991.

African Union troops have been in the country since 2007 helping various UN-backed governments fight al-Shabab.

Over the last four years, the militants have been driven from most of the key towns they once held but they still control rural areas in the south.

Hot Takes: The Top Climate Change Reporting of the Past Year