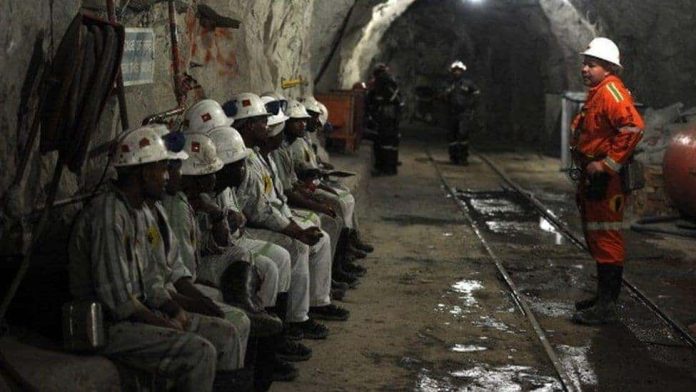 South Africa’s governing party has accused the private sector of being “unpatriotic” following an announcement that mining companies will cut thousands of jobs.

The African National Congress (ANC) warned that the job losses would worsen unemployment.

Mining firms have announced plans to lay off nearly 14,000 workers due to low commodity prices.

The country is a leading producer of platinum and gold.

Speaking at an ANC meeting in the commercial capital, Johannesburg, the party’s influential secretary-general, Gwede Mantashe, called on firms to reconsider their decision as it was “unpatriotic” to cut jobs “every time the behaviour of commodity prices goes down”.

A meeting will be held with mining firms to raise the issue, he said.

“If the private sector is not co-operating, then the state is not going to succeed,” Mr Mantashe warned.

The industry body, South Africa Chamber of Mine, said companies did not take decisions on cutting jobs lightly.

“We are acutely aware of the impact of job losses on our industry, our communities and our country as a whole,” its spokeswoman Charmane Russell told the BBC.

“Where possible, forced job losses are mitigated through alternative arrangements, including transfers, training people in new skills and early retirement,” she added.

Last week, UK-based platinum firm Lonmin said it would cut 6,000 jobs as the fall in the platinum price forced it to scale back operations in South Africa.

Anglo American said it would cut a similar number of posts from its operations worldwide.

Most of its operations are in South Africa and South America.