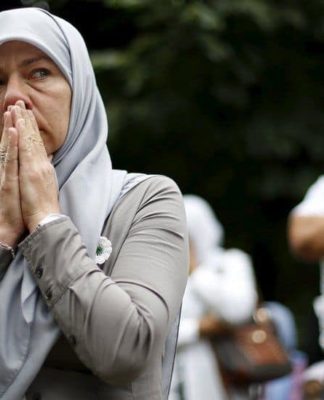 The bodies of dozens of victims of the Srebrenica massacre are being taken back to the Bosnian town for burial.

The killing of some 8,000 Muslim men and boys in July 1995 by Bosnian Serb troops was the worst massacre in Europe since World War Two.

A service to bury 136 newly-identified victims will take place on Saturday, 20 years to the day since the massacre began.

Another 6,241 victims have already been identified.

A truck carrying the newly-identified remains left a mortuary in Visoko, near Sarajevo, early on Thursday.

Relatives of the victims cried as coffins were put on board.

Among them was Hafiza Tihic, 60, whose father Ramiz was among the victims.

“I don’t know how he was killed, but I remember the moment when he was separated from us,” she told AFP.

“I entered a bus and he was put to one side. What did they do to him later? Only they would know,” she said, referring to Bosnian Serb forces.

Crowds also lined the streets of Sarajevo as the coffins passed through the Bosnian capital.

On Wednesday, Russia – an ally of Serbia – vetoed a draft UN resolution that described the killing as a “genocide”.

Russia’s UN Ambassador Vitaly Churkin said adopting it “would be counter-productive, would lead to greater tension in the region”.