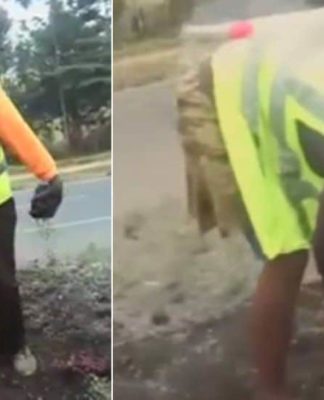 The governor of Kenya’s capital has denied that contractors are uprooting grass planted in Nairobi for US President Barack Obama’s visit.

A video began circulating on social media on Thursday appearing to show workers in the city uprooting plants and alleging they were only on loan.

But Nairobi governor Evans Kidero said a contractor was “restoring the ground in order to do the proper planting”.

Mr Obama left Kenya on Sunday after his weekend visit.

The governor’s efforts to plant grass along the roads only a few days before President Obama’s trip had previously been mocked on social media.

The BBC’s Abdullahi Abdi in Nairobi says the governor spent about 50m Kenyan shillings ($488,000, £312,000) on giving the city a facelift, which included planting the grass.

Last week, the governor used the hashtag #KideroGrass in a plea for people to avoid walking on the newly planted verges.

It then began trending on Twitter, and even Kenya’s President Uhuru Kenyatta got involved, joking: “Don’t worry: Plant it, it shall grow”, Kenya’s Capital TV reports.

Governor Kidero used the hashtag again in his Facebook post on Thursday denying the accusation that plants were being uprooted.

“NO ONE is uprooting ‪#‎KideroGrass,” he said.

“#KideroGrass is well on course, the quality of grass selected takes time to grow!” he added.

One of the comments on his post said: “Governor please explain to me slooowly why the flowers were planted with polythene bags intact”.

What has Obama’s visit done for Africa?

The scholarship that changed the world