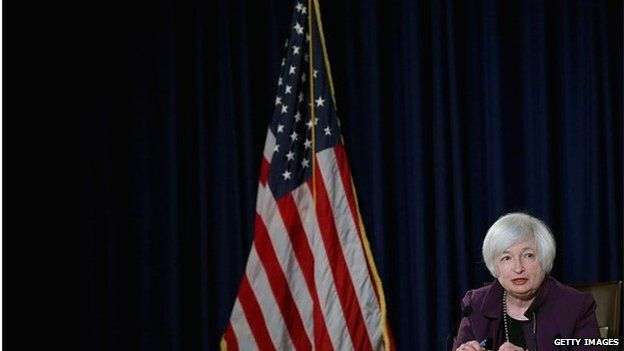 Federal Reserve chairwoman Janet Yellen has repeated her view that the central bank is likely to start raising interest rates this year.

Recent weak economic data and a call from the International Monetary Fund to delay a rise until 2016 had dampened expectations of a 2015 increase.

But she said in a speech that it would be appropriate to start “normalising” monetary policy this year.

Speaking in Cleveland, Ohio, Ms Yellen said she expected the economy to grow steadily for the remainder of the year, and that would at least allow the Fed to move ahead with its first rate hike since late-2008.

“I expect it will be appropriate at some point later this year to take the first step to raise the federal funds rate and thus begin normalising monetary policy,” she said.

“But I want to emphasise that the course of the economy and inflation remains highly uncertain.

“We will be watching carefully to see if there is continued improvement in labour market conditions, and we will need to be reasonably confident that inflation will move back to 2% in the next few years,” she said.

On Tuesday, the International Monetary Fund warned the Fed against raising interest rates this year.

A rise risked adding to the growing international economic and political threats facing US growth, the IMF said in a health check on the world’s largest economy.

But Ms Yellen said during questions after her speech that the IMF’s view was “part of the spectrum of opinion”.