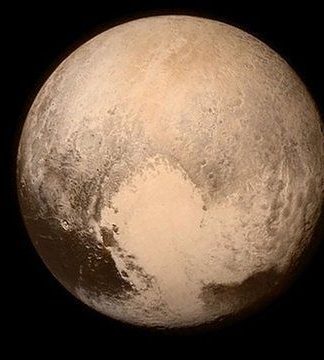 Scientists will shortly present a first look at pictures acquired by the New Horizons probe during its historic flyby of Pluto.

The spacecraft sped past the dwarf planet on Tuesday, grabbing a huge volume of data.

In an initial communication with Earth, it confirmed that the pass, which went to within 12,500km of the surface, was conducted without incident.

But then in further downlinks, New Horizons is returning science.

This includes more shots of Pluto and its main moon, Charon.

We also expect at some point views of two of the minor moons, Hydra and Nix.

The American space agency has scheduled a media briefing at 19:00 GMT (20:00 BST) to release material publicly.

Significantly, all these images will be at a much higher resolution than anything we have seen so far.

In the case of Pluto, we should get some “postage stamp” views of the surface that will show up details 10 times better than what was in the spectacular full-frame picture released on Tuesday just prior to the flyby.

The mission team has told New Horizons this week to send down only a small fraction of the total data it carries.

Part of the reason is that the probe continues to do science, observing Pluto from its night side.

The intention is to keep looking at it for about two more full rotations, or 12 Earth days.

Scientists say a crescent view of the dwarf planet is more likely to reveal the presence of clouds and hazes.

Turning the cameras to look past Pluto in the direction of the Sun also offers the best chance of detecting any faint ring system that might exist around it.

We were as giddy as kites looking at the data

“This is all so special,” Dr Cathy Olkin, a deputy project scientist on the mission, told the BBC.

“All of this is new. We’re learning new things every day.

“Every time the spacecraft communicates with the deep-space network and sends its data down – we learn something new.

“It’s just remarkable to me that all this data is sitting on the spacecraft, just waiting for us to unlock its secrets.”

Team-members confess to being just a bit giddy as they marvel at what they are learning about Pluto.

They lost data 10 days ago when the probe had a technical upset. This meant that the final information they got from Ralph just before the flyby came with a sudden jump in quality.

And when they stretched the colours in their images of Pluto and Charon, they were able to see surface differences that had previously gone undetected.

“We got smacked in the face big time, and it was thoroughly enjoyable,” said Dr Carly Howett from the Southwest Research Institute.

“Because we missed that intermediate step, we went from having only six pixels across to all of a sudden seeing surface features in the colour,” Dr Howett said.

“We were as giddy as kites looking at the data.”

New Horizons has been called the mission of “delayed gratification”, because of the length of the journey to get to Pluto and the time it will take to downlink all its data.

The vast distance to the dwarf, combined with the modest power of the probe’s transmitter, means the transmission bit rates are extremely slow.

The team will first command the data to come down in a compressed form, and then in an uncompressed form. This whole process will not be compete for 16 months.

Trump was right in one respect: you have to stop the bully from killing the kids