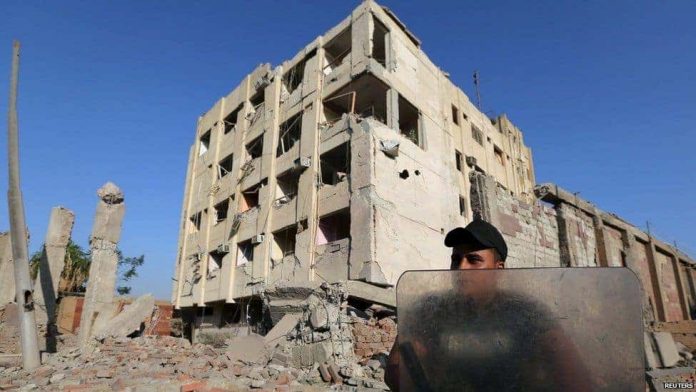 The blast, which was felt across large parts of the Egyptian capital, injured 29 people, six of them police.

The explosion happened in the early hours of Thursday morning. There were no reports of any deaths.

The militant group Islamic State (IS) says it carried out the attack “to avenge Muslim martyrs”.

The statement was not attributed to IS’s known branch in Egypt, Sinai Province, but simply had a logo reading “Islamic State, Egypt”.

A BBC correspondent in Cairo reports a heavy police presence on the streets.

There have been several bomb attacks by Islamist militants in Cairo this year.

“A man suddenly stopped his car in front of the state security building, jumped out of it and fled on a motorbike that followed the car,” a ministry statement said.

The blast left a crater in the street and partially destroyed the building. Locals said glass from blown-out windows was strewn across several streets nearby.

Sinai Province militants based in northern Sinai have been behind many of the recent bomb attacks in Cairo.