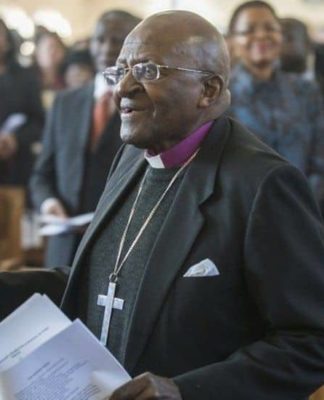 South Africa’s Archbishop Desmond Tutu is to spend the next two weeks in hospital, according to a family statement.

The Desmond and Leah Tutu Foundation said he was on a new course of antibiotics to treat an inflammation.

The 83-year-old Nobel peace laureate “is in good spirits and not in any pain,” the family said.

This is his third stay in hospital in recent weeks.

He was previously treated for an infection resulting from his prostate cancer treatment.

Details of his current condition have not been released.

Archbishop Tutu retired from public life in 2011 but continues to travel.

The archbishop deeply appreciate the prayers and good wishes of so many, said his daughter, Reverend Mpho Tutu.

“While my father was very grateful to the media for its concern, he had humbly requested journalists not to anticipate daily updates on his condition so that he could rest peacefully while receiving treatment,” his daughter added.

Archbishop Tutu in his own words

South Carolina Rep. Jim Clyburn says that Democrats that want to win in November must advertise in the Black Press