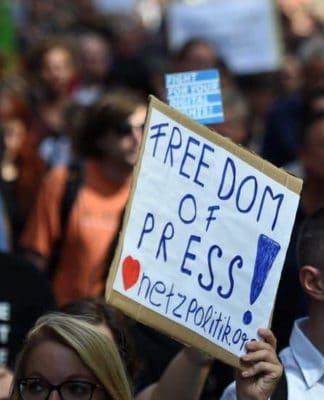 Germany’s justice minister has sacked the country’s top prosecutor, who had accused the government of interfering with a treason investigation.

Heiko Maas said he no longer had confidence in Harald Range, dismissing his statements as “incomprehensible”.

Prosecutors are investigating whether the Netzpolitik website revealed state secrets in articles about plans to step up state surveillance.

The outcry put the government on the back foot, with senior officials stressing that Germany was committed to press freedom and casting doubts over whether the articles constituted treason.

Earlier on Tuesday, in a rare public row between the German judiciary and the state, Mr Range said the government had asked him to drop an independent investigator from the inquiry, who concluded that one of the articles published did amount to a disclosure of a state secret.

The request, said Mr Range, amounted to “an intolerable encroachment on the independence of the judiciary”.

He said that while the freedom of press was valuable it was not “limitless”.

This clash between the government and the judiciary is all about freedom of speech.

The case has provoked national outrage in Germany and street protests, with demonstrators accusing the authorities of wanting to muzzle the press.

Germany’s government leaders, including numerous ministers and Chancellor Angela Merkel, have been quick to follow the public mood, all expressing support for the journalists.

Free speech is a sensitive issue in Germany because of the country’s painful experience in the 20th century with both Nazism and communism.

So people here are all too aware of the dangers of an overly powerful state, and are quick to protest if they feel their civil liberties are under threat.

But the justice minister responded at a news conference in which he called Mr Range’s comments “incomprehensible and misleading”.

He said his trust in the prosecutor’s ability had “suffered lasting damage” and he had requested his dismissal.

Mr Range is 67 and was due to retire next year. Munich’s chief public prosecutor, Peter Frank, has been named by Mr Maas as his successor.

The state investigation, into two journalists at Netzpolitik.org, is currently paused. The pair have called for the case to be dropped.

A later article in April concerned the spy agency’s efforts to set up a special unit to monitor social networking websites.

Critics have accused Mr Range of double standards, with the prosecutor earlier this year dropping an investigation into alleged tapping of Chancellor Merkel’s phone by the the US National Security Agency over lack of evidence.

The claims shocked the public and strained German-American ties.

The media outcry over the treason investigation started almost immediately. Süddeutsche Zeitung points out that treason is a very loaded word. The law behind it has in the past been used to go after political opponents.

Die Welt says this case highlights unprofessionalism on all sides – calling it “silly season theatre”. It says freedom of press, which many say was threatened, has been saved by an alliance of politics, media and society.

But questions about the independence of justice – not a minor issue in a constitutional democracy – remain unanswered. Der Spiegel calls Tuesday’s developments a rebellion by the prosecutor, which could only end in his sacking.

Frankfurter Allgemeine Zeitung says like any scandal, somebody had to be blamed. The ministers for interior and justice were safe but a fight between Mr Range and the head of the intelligence service culminated in his attack on the justice minister – a move that might seem deliberately designed to provoke his sacking.

VIDEO: Why a smile could change this advert