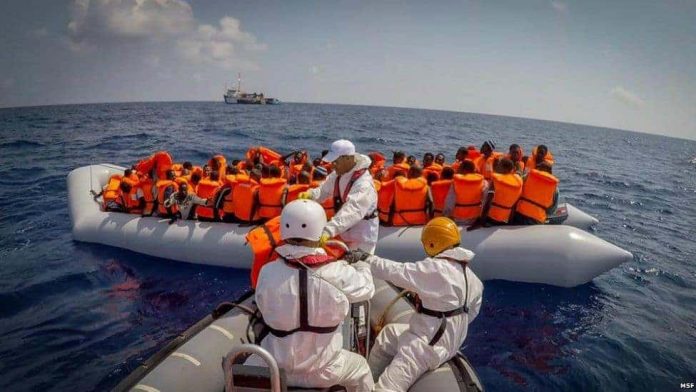 Rescuers are searching for hundreds of migrants in the Mediterranean after the boat they were on capsized off Libya.

Some reports suggest as many as 700 people were on board the overcrowded vessel when it came into difficulty.

More than 2,000 migrants are said to have died in 2015 trying to cross the Mediterranean to reach Europe.

Wednesday’s incident occurred when the packed fishing boat ran into rough weather about 15 miles (25km) from the Libya’s coast.

A distress call was picked up in Sicily and one of the first ships on the scene was an Irish navy vessel. But as she launched her boats, the migrants apparently moved to one side of the fishing boat, causing it to capsize.

At least three other ships and three helicopters were reported to have arrived in the area shortly afterwards to help with the rescue.

MSF said its Dignity I vessel was at the scene and two more of its boats were on their way to the area.

“The team on the #Dignity1 can confirm that there have tragically been many deaths but does not have figures at this stage,” MSF said in a tweet.

The Italian branch of the UN refugee agency (UNHCR) said 250 people had been rescued and 16 bodies recovered.

Earlier this week, the ION warned that the number of migrants attempting to cross the Mediterranean is much higher than in the same period last year.

“It is unacceptable that in the 21st Century people fleeing from conflict, persecutions, misery and land degradation must endure such terrible experiences […] and then die on Europe’s doorstep,” IOM director general William Lacy Swing said in a statement.

Are you affected by this story? Please let us know by emailing haveyoursay@bbc.co.uk with your experiences.

Please include a contact number if you are willing to speak to a BBC journalist. You can also contact us in the following ways:

Or use the form below: