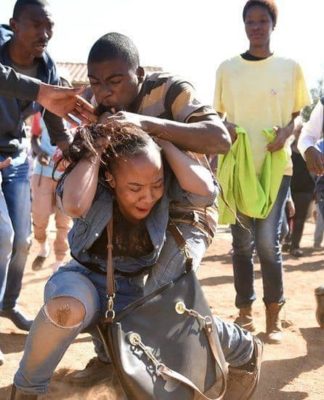 South African police are investigating the raid of a church run by a self-styled prophet accused of making his followers eat snakes, rats and hair.

Opposition Economic Freedom Fighters (EFF) party activists disrupted a service near the capital, Pretoria, and a tent was burnt down in the fracas.

However, police withdrew charges of animal cruelty against him.

Police spokesman Mathews Nkoadi said in July that there were no witness statements and insufficient evidence to bring a case.

The EFF said that they had raided a service on Sunday because they wanted Mr Mnguni to “lead by example” and eat snakes and rats.

But EFF spokesman Mbuyiseni Ndlozi tweeted that the pastor “ran away” so they were unable to confront him. Mr Mnguni has not commented on the raid.

“We are fighting corruption and this man is [allegedly] a prime example of that,” EFF official Mandisa Mashego is quoted as saying.

EFF activists left after a tent from the church was brought down and set ablaze; the congregation then continued with the service.

In one instance, a young man attacked a journalism student and tried to bite her hair after being told by a preacher that there was food in it, Pretoria News reports.

“There are people who are trying to make money off the desperation of people, and that is exactly why you need some sort of mechanism for serving a standard on how churches are run,” said its general secretary Bishop Malusi Mpumlwana.

South Africa is one of the most unequal countries in the world, with a high rate of unemployment and poverty.