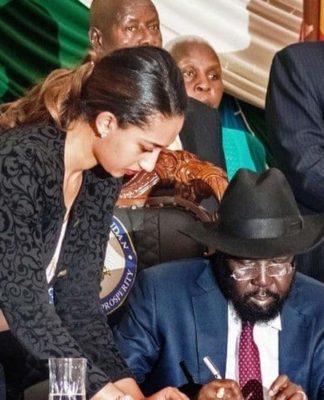 The UN Security Council has warned the warring sides in South Sudan they face an arms embargo and other sanctions if they do not implement a peace deal due to come into force on Saturday.

In a unanimous statement, the council called on both parties “to adhere to the permanent ceasefire immediately”.

President Salva Kiir signed the agreement on Wednesday but expressed reservations about it.

At least seven previous ceasefires have been agreed and then shattered within days or even hours.

Under the agreement, the rebels will be given the post of first vice-president, a position Mr Machar held until 2013 when he was dismissed by President Kiir.

The security council expressed its “readiness to consider appropriate measures” if the deal was not implemented, including “an arms embargo and additional targeted sanctions”.

The statement also expressed concern “with any statement by any party suggesting a lack of commitment to implement the agreement”.

On Wednesday, the US welcomed the deal but said it did not “recognise any reservations” that President Kiir had highlighted at the signing ceremony.

Fighting between forces loyal to the two men over the past 20 months has left tens of thousands of people dead and forced more than 2.2 million from their homes.

The leaders of Kenya, Uganda and Ethiopia all helped to broker the agreement and witnessed the signing in South Sudan’s capital Juba.

South Sudan is the world’s youngest state, having broken away from Sudan in 2011.

Fighting broke out in December 2013 after President Kiir accused his sacked deputy Mr Machar of plotting a coup.

Mr Machar denied the charges, but then mobilised a rebel force to fight the government.

Key points of the peace deal:

THE GANTT REPORT: The Side Cat

What does it Mean to be a Gig City? Upload Speeds Powering Entrepreneurs