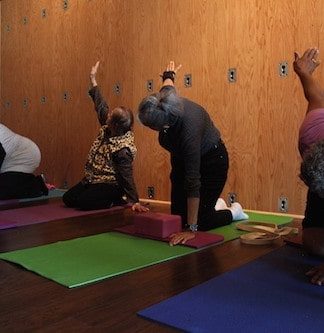 The 61-year-old mother and fitness lover travels from her home in Bernal Heights to stretch, twist, and strengthen her body at the neighborhood studio.

For McNaulty, yoga is part of a holistic fitness program that she adopted after she was told she had dangerously high blood pressure a few years ago.

“I was one of those people who put salt on everything. I was told I could have a heart attack or stroke,” she says.

The recently opened TriFusion Yoga Studio, decorated with colorful lanterns and plants, comes to life as seniors greet each other and the instructor, Armando Luna. Most of the students live in the neighborhood.

“I don’t live so far,” says 73-year-old Bessie Morris. “I can walk down here and get a little workout.”

The group has come to know each other and make friends through the network of free fitness opportunities available in the neighborhood. The activities offered are convenient for seniors, the underemployed or unemployed adults to access.

Student Gloria Van der Horse, 87, says “I enjoy coming here because I stopped work when I was 85. I worked a 40-hour job.” She said she wanted to continue keeping busy, and TriFusion provided her with a way.

TriFusion boasts a “Great Yoga Wall,” complete with adjustable straps for students to stretch and balance with. The wall can appear intimidating at first, but Luna points with pride to senior after senior who has learned to use and enjoy it.

Dorothy Wesley, 78, had never tried yoga before, but decided to join the class because it sounded interesting to her. She began yoga after her heart surgery. She says the wall is “somewhat challenging for me, but exciting.” Now she recommends yoga to her friends and family.

“When I have visitors, they always want to come just to see what it’s like and get themselves introduced to it.”

Betty Shepard travels to the class from Daly City. She says she started yoga again after a 3-year break. The 74-year-old heard about TriFusion from her cousin and the duo attends most of the Monday classes together.

“I do feel better,” Shepard says. “Since I’ve been doing exercise, especially coming here and to the strength training classes at the Y, my cholesterol has come down about 25 percent.”

At the end of the class, Luna turns off the lights for a brief meditation. Morris describes this as an important therapeutic part of the class.

“We have a quiet time for about 10 minutes and close our eyes and just mellow and blank everything out. It’s really good for us. It relaxes us.”

Jane Alexander, who lives down the road from the studio, has been coming to the senior class since it began nearly two months ago.

“It’s beautiful,” she says. “I rest so good at night after I leave here.”

While she takes advantage of other fitness opportunities, such as swimming and walking, she says that she has felt “more limber, more moveable, since we’ve been coming to yoga. It’s really helped a whole lot.”

One of Deborah McNaulty’s goals in the beginning of her fitness plan was to lower her blood pressure.

“I looked at my mom on all this medication; I didn’t want to become her taking so many different pills,” McNaulty says.

Her hard work has paid off: her blood pressure has come down and she is hopeful that she will soon be able to stop her medication.

In class today, McNaulty is one of two students using the wall, making up for her hesitation in the previous class.

“Last week I had eaten really bad. I’d had a birthday; my body was like ‘what are you doing?’ I was puffy, I could tell the difference.”

This week, as she and another student move into an inverted pose on the wall and lift their arms into a prayer position, the other students in the class give a cheer.

“I think with all these wellness programs I have met some amazing seniors who have become my family and we’re all on a path to healthy eating and exercise. We’re all helping each other,” McNaulty says.

This article is sponsored by Healthy Hearts, a program of the San Francisco Department of Public Health that promotes free exercise for Latinos and African Americans as a way to fight heart disease. For free fitness information call 211. Follow #healthyheartsf on Facebook and Twitter.