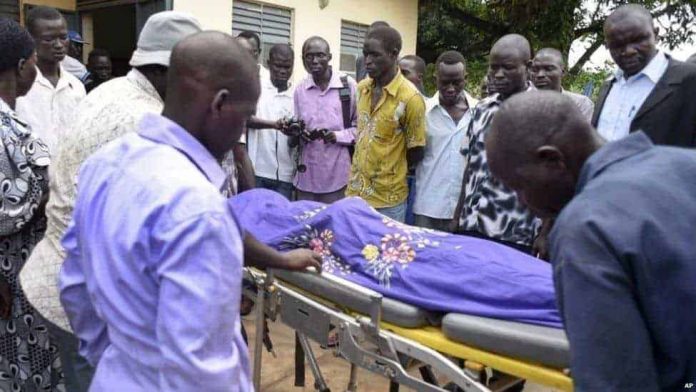 Gunmen have killed South Sudan reporter Peter Julius Moi by shooting him twice in the back in the capital, Juba, his family said after identifying his body.

He is the seventh journalist to be killed this year in South Sudan, where a civil war is ongoing.

His killing comes days after President Salva Kiir threatened to kill reporters “working against the country”.

A presidential spokesman said the words were taken out of context and police were investigating Mr Moi’s death.

Ateny Wek Ateny said a statement would be issued to clarify President Kiir’s remarks, made at the airport in Juba before he went to Ethiopia for peace talks to end the civil war.

Mr Moi worked for South Sudan’s Corporate Weekly newspaper and was killed at about 20:00 local time (17:00 GMT) on Wednesday night by identified gunmen on the outskirts of Juba.

Juba-based journalist Jason Patinkin told the BBC’s Focus on Africa radio programme that the killing of Mr Moi was a very worrying development for the journalist community in South Sudan, which has seen a steady decline in press freedom since the outbreak of the civil war in December 2013.

The Committee to Protect Journalists (CPJ) says security agents shut down two privately owned newspapers earlier this month as well as a media group that produced a popular radio series.

The media freedom lobby group has also been critical of Mr Kiir’s comments, which local journalists believe were connected to media criticism of the protracted peace negotiations.

“The leader of any country threatening to kill journalists is extremely dangerous and utterly unacceptable,” the CPJ’s Tom Rhodes said in a statement.

Mr Kiir has also been under fire from diplomats for failing to sign a peace deal on Monday.

The US state department has said he has now promised to sign after “a couple more days of consultation”.

But the US has submitted draft proposals for a UN arms embargo on South Sudan.

Nearly two million people have been left homeless since conflict broke out in the world’s newest state in 2013.

Mr Machar signed the accord in Ethiopia’s capital, Addis Ababa, on Monday – the deadline set by mediators.