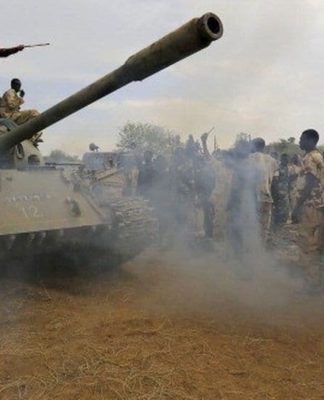 Amnesty International has accused Sudan’s army of committing war crimes by bombing and shelling civilians in its South Kordofan region.

More than 374 bombs, including cluster bombs, were dropped in 67 locations between January and April, killing at least 35 people, the human rights group said.

Sudan’s army has not yet commented on the allegations.

It has been battling rebels demanding more rights for the region since 2011.

At least 1.4 million people, or a third of South Kordofan’s population, have fled their homes because of the conflict, Amnesty said in a report.

African Union chief mediator Thabo Mbeki is currently in Sudan’s capital, Khartoum, where he is expected to discuss the conflict with government officials, the AFP news agency reports.

“War crimes cannot be allowed to be committed with impunity and a population facing a protracted humanitarian crisis can no longer be ignored by the world,” Amnesty said.

It added that its research team had visited South Kordofan, and found cluster munitions at four sites.

“The use of prohibited weapons – such as cluster bombs – launched from high-flying aircraft has resulted in civilian casualties,” the group said.

Children had been killed playing with unexploded ordinance, Amnesty added.

Sudan’s government has previously accused the rebels, the Sudan People’s Liberation Army-North, of being backed by neighbouring South Sudan, which became independent in 2011.

The conflict has been fuelled by grievances among non-Arab groups over what they see as neglect and discrimination by the Arab-dominated government in Khartoum.

The Obama Years: The Power of Words

The Ballot or the Booty