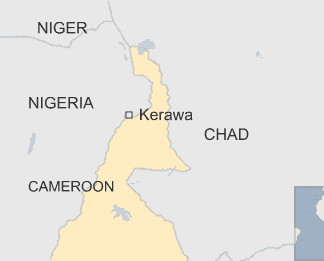 At least 19 people have been killed and 140 wounded in two bomb attacks in northern Cameroon, officials say.

The blasts happened in the Kerawa region, where Cameroon’s army is fighting Nigeria’s Boko Haram militants.

There have been a spate of recent attacks in northern Cameroon blamed on jihadists from Boko Haram.

The authorities in August said that the militants are believed to enter Cameroon disguised as refugees.

Boko Haram fighters were accused of a series of suicide bombings in the northern town of Maroua, that killed dozens of people in July.

The first explosion on Thursday went off just after 0900 local time (0800 GMT) in the market in Kerawa.

The second was detonated soon afterwards, about 200m (218 yards) from the military infantry camp, an army officer based in the north told Reuters.

Some reports say at least 30 people were killed.

A local government official told Reuters that the attacks were carried out by female bombers although there has been no independent conformation of this.

Boko Haram militants have increased the number of attacks on countries bordering its north-eastern Nigerian stronghold – Chad, Niger and Cameroon – after they participated in a regional offensive against them earlier this year.

Cameroon has deployed thousands of troops to its northern border where militants regularly carry out raids, killing some villagers and kidnapping others.

Boko Haram has vowed to attack Cameroon because the country is supporting the Nigerian military’s mission to defeat them – and is part of a newly boosted multi-national force to battle the militants.

Female suicide bombers were behind several blasts in northern Cameroon in July and the regional governor has banned the Islamic veil as part of counter-terror measures.

Boko Haram at a glance:

Why Boko Haram remains a threat

Who are Boko Haram?