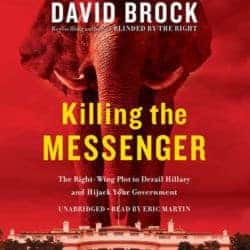 “Killing the Messenger” for the first time reveals how a major conservative newspaper tried to destroy the Clintons back when Bill Clinton became President. Brock was one of the people hired to do the job who turned on them because he could not live with the idea of making up stories to accomplish the task of the conservatives. He changed political parties and began to work for Democrats throughout the nation forming several watchdog organizations to monitor conservative media, operatives and candidates who attacked other Democrats. “Killing the Messenger” is also very timely as Brock takes readers behind the scenes of how groups are trying to destroy Hillary Clinton’s campaign for 2016. “Killing the Messenger” is a fast paced non fiction work that reveals the dirty side of politics that voters hate in campaigns.

The author has a great idea in collecting many of the great lines in films from the years of 1939 to 1959 that are often overlooked. Many of these films still have life on TCM that helps them to find many new viewers. Films of this day had certain restrictions but they hold up even today and Miss Graham has done a wonderful job of collecting over 500 lines from so many of these older films. She also keeps alive the actors names like Melvin Douglas, Greta Garbo, Ernest Borgnine, and many others. Each listing includes the name of the film, the year and the company that made the movie. Movie buffs of all ages will enjoy reliving the golden age of movie making with “I Only Quote From the Best-Revisiting Hollywood’s Golden Age.”

Daniel de Vise brother in law to Don Knotts, tells the most detailed account of the lives of Andy Griffith and Don Knotts in “Andy & Don The Making of a Friendship and A Classic American TV Show. We learn about the two men where they both came from, what they were like before they got into comedy, their first big breaks, when they first worked together. Later there is much more revealed about the Andy Griffith Show than ever before. We learn why Don left the show but came back for several guest appearances, why Andy decided to end the show and how there were several spin-off series. But the book does not end there because it is not just about the show but also both men’s careers throughout the rest of their lives. Andy struggled until he got “Matlock” while Don worked in many films and other TV shows including “Three’s Company” At times there are some negatives that are very surprising about Andy Griffith but the book is a very revealing look at two men who worked together to make the series “The Andy Griffith Show” the classic that it is today. Fans of both actors will not want to miss this one.

Downton Abbey has continued to excel in world wide popularity for six seasons. We in this country will see the sixth and final season starting in January 2016. With The Wit And Wisdom of Downton Abbey it is easy to see why the show is such a crowd pleaser. Jessica Fellowes discusses in her introduction some of the reasons why the show is so successful, among them are the scenery, the actors and the writing by Julian Fellowes. As is true with any book, movie, play or TV show the first thing has to be the writing and here we see why Julian Fellowes is so good. These are many of the great lines the characters delivered each season including some from the new one. Reading the lines on the pages of “The Wit And Wisdom of Downton Abbey” helps us remember many of the best episodes throughout the years. No fan of the show should miss “The Wit And Wisdom of Downton Abbey.

Susan Cheever in “Drinking in America Our Secret History” studies the effect of alcohol on many aspects of the country’s history. From the Boston Tea Party to the Presidency of Richard Nixon she reveals many little known facts that are interesting. Covered also are the two President Adams and their families, other political figures and she devotes much of the book to her own drinking problem as well as other authors including her father John Cheever. “Drinking in America” at times has many shocking revelations of the role alcohol has played in our country that is a great addition to the legends of this nation.

The author takes readers in “Climate Change” on a long journey through the evolution of the weather of the planet from the beginning to the present. He shows that climate change is something that happens very frequently throughout the history of the globe. He also talks abut how animals and humans contribute to climate change. “….every human being is a heat engine throwing off heat more than 40 degrees above the warmest year in history. The most basic human biological functions necessary to sustain life for a short time, particularly respiration, but also perspiration and elimination -all these heat the planet. Even human deaths heat the planet…Pets often require medical care, eat processed food, and use energy and generate heat in their own right.” These are factors that contribute to climate change. What he does not address is what we know now as Global Warming that is caused by many different things we are doing to our universe. He also only uses a model of the 48 states of the United States and not what has been happening throughout the world. Hyde’s “Climate Change” book has a lot to say but just does not go far enough to address the weather problems we have today

“Release Your Treasures” reveals that all of us have many different talents that we may not be aware of. The author shows why it’s important to compliment people for what they do, when and where it is appropriate to use a cell phone and other electronics, how to turn negatives into positives, and many exercises people can conduct to teach how to look deeper into themselves. “Release Your Treasures” is an easy to follow self help title that is very timely.

As a celebration of the close to fifty years of “Star Trek” there will be many new titles released in the next year. This is one of them. The Premise is that there is an 8th season of “Star Trek The Next Generation” that was never shown. Here for the first time are the episodes that never made it to the screen. Actually Mike McMahan has written a fun authorized parody of the world of “Star Trek” that is laugh out loud fun reading for any “Trek” fan.

Isabella is a young girl who tells about her brother Ethan who has autism. She tries to show that her Ethan is a person who thinks and acts different because of his autism. She even has a nickname for Ethan because the family went to a hockey game where he was given a hockey puck by one of the players. He then collects pucks thus the nickname stuck. “My Brother Puck” compassionately shows how family members deal with a member who has Autism and tries to teach other people that an Autistic individual is still a person just a little bit different.

A young boy named Bobby has a knee problem that prevents him from playing basketball on a team. He refuses to believe that he will never be able to participate in the game he loves. Through determination and prayer to God he never doubts that he will one day be able to play. “Bobby’s Faith” is a positive message to kids and adults that good things can come out of bad if you make it happen.