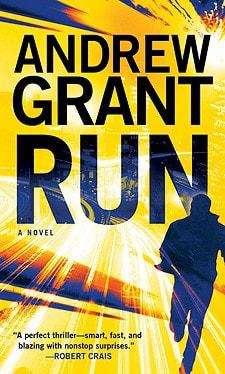 “Run” is an exciting fast paced cat and mouse chase action thriller that would make a great big screen movie. Early Monday morning, Marc Bowman a computer consultant is told his services are no longer required for the company he has been working with that his wife still works for.   At home she confronts him and she tells him to give back some techno information he has taken from the company.  Their relationship gets rocky and she leaves not telling him where she is going.  Over the next few days things take a nose dive to where he is in a fight for his life.  He also does not know who to trust as his world collapses while he tries to survive.  I devoured “Run” and look forward to reading other books by Andrew Grant.

“Powerless” begins with a frightening scenario of a massive geometric solar storm that hits the United States and other countries.  It wreaks havoc on many different things from airplane guidance systems to electric power companies unable to deliver the service. The novel builds, with a government unable to fix the problem, people struggling to survive and a military barely able to function.   The story is scary because we as a society have seen what can happen when solar flares erupt and hit this planet on a daily basis certain months of the year.  The novel gets confusing of which of the nations of the world are affected.  Two that seem to be ok are South Korea and Iran, who rattles its saber once again in the Middle East.  The problem I had is how can the crippled military of the United States take on Iran.  It is just not believable with the scenario the author has presented.  “Powerless” was a major disappointment.

A short time after the events of the “Star Trek” episode “The Cage,” the Enterprise under the command of Captain Christopher Pike has an outbreak of a deadly disease.  There is a way to save the crew but it requires obtaining a substance on a planet not far from the Klingon border. Cox develops the characters of Spock and Pike very well, showing that they are more complex than we have ever seen before “Star Trek” has always thrilled fans and “Child of Two Worlds” is a great addition to the legacy of the series.  .

Angel has always known there is something different about herself.  She goes to school and has a brother and two parents, but as the novel opens she begins to learn that she has been living with a foster family.  She has been having dreams but is unable to understand their meaning until she meets a man named Gregor who begins to shed light on who she really is and what her life is to be.  “Finding Angel” is a fantastic fantasy that takes readers along a self discovery journey with interesting characters surrounded by a dark and sinister realm of magic that Angel must learn how to deal with.

A question at science fiction conventions has long been “Can you combine humor and science fiction?”  The answer with “Future Wars… And Other Punchlines” is an overwhelming yes”.  Hank Davis has collected some of the finest short stories that do both, tell good sf while being very funny.  Some of the authors he has included are Frederik Pohl, Clifford D. Simak, Gordon Dickson, David Drake and Sarah A. Hoyt.  A special mention has to be given to Fredric Brown who was a master of the shorter short story that many times was only one page.  He is included here with “Sentry” Like many of his works of sf there is a surprise ending that is memorable.  “Future Wars… And Other Punchlines” is great fun for anyone who likes to read short stories.

Frank Sinatra was a multi talented performer whose career spanned more than five decades.  He was a crooner who was like no other with hit after hit of great songs like “New York New York” that were truly his, while he was a director, movie star, and much more.  “The Cinematic Legacy of Frank Sinatra” takes readers back into the film career of a legend, and gives more detail to the different types of roles Sinatra played in so many different types of films.  Included are writings by Sinatra’s kids who add their perceptions of their talented dad the world loved.  “The Cinematic Legacy of Frank Sinatra” is perfectly timed for the 100th anniversary of Frank Sinatra that no fan of the man and his movies should miss.

During the 2012 Mitt Romney presidential race, the press depicted Ann Romney his wife,  as someone who treats her MS by riding horses.  “In This Together” shows that since she first learned of her MS, she has done a lot more than just ride horses. She has listened to her doctors and tried many different treatments, and she reveals that it is very hard to stay ahead of the disease because it attacks a person’s body in many different ways and there is  very little known about MS. Romney tells in greater detail how she and her family have dealt with it, having a support group of friends and professionals, and the things she has done to help others.  “In This Together” is also the life story of Mitt and Ann Romney that shows them to be a lot more than we saw in the presidential election.

Grisham introduced Theodore Boone, his family and friends in “Theodore Boone Kid Lawyer” In the small city of Strattenburg a sensational murder trial begins.  Thirteen year old Theodore Boone, whose parents are both respected attorneys, dreams of one day becoming a lawyer. Theo has information that could change the outcome of the case but due to a technicality can not use it as evidence for the state.  The state has a very shoddy case to begin with.  Theo has to find a way to help the state prosecute the man charged with the crime. “Theodore Boone Kid Lawyer” is for anyone who likes a good legal thriller.

In her music class Anna decides she wants to study and play the violin.  Through several mistakes, she learns several lessons she will take with her the rest of her life. Parents and kids can read and discuss the many underlying themes “Anna Learns to Play the Violin” presents, to lead better lives.