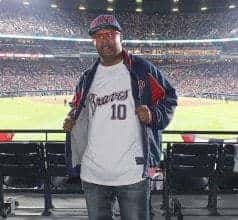 Meet Demario A. Scott.  This Atlanta Georgia sports junkie is the real deal. He doesn’t have a favorite sport, he loves them all. He follows the Atlanta Falcons, Atlanta Braves, Atlanta Hawks and the Georgia Bulldogs with a dedication most just talk about. When we say follow we don’t mean in a casual manner, he is an active participant at most of the games these teams play.
Whenever he’s not working you’ll see him swagged out in his teams gear– it’s become a signature look he’s known for by his friends and family.
In 2015 he was selected the Nation’s Ultimate Sports Fan Recipient by the What A Fan Awards, an annual recognition award show specifically created to honor devoted sports fans.
For twenty two years he’s been passionate about sports and his Atlanta based teams. We asked how his passion grew and here’s what he told us:
“I love the energy I get because of it. Sports are my life. I eat, sleep, and breathe sports. The love I have for my home teams is immeasurable. My teams aren’t chosen based on championships or the star of a team. I am not a bandwagon or fair-weather fan. I am very knowledgeable about valuable information regarding my teams such as stats and rosters from many years. I showcase my teams on a daily basis whether it’s a hat, lanyard, socks, t-shirt, shorts or glasses.”
We found his dedication to be remarkable   It’s not like any of these teams have been in a championship chase in some time. We wanted to know how he keeps up his enthusiasm for his teams when they’re not playing very well, here’s what he told us:
“Our records may not be perfect, but I am always looking forward to a new year. I will never give up on the home teams despite their performance. True fans don’t abandon their teams after a losing season. Win, lose, or tie I am a home team fan til I die!  Not only is my loyalty unwavering, but to show my love and dedication to the home teams, I travel two, sometimes three or more hours for games, camps, and any other team sponsored events quite frequently. I am there from start to finish. My friends and I are one of many at the beginning of lines waiting for gates to be opened and the last to leave. I do not under any circumstances leave before a game ends because my team may be performing under my expectations. Actually, I’m there so long, I’ve been asked to leave. I don’t just talk the talk, I walk the walk.”
Demario. we are pleased to introduce you as our Fan of the Week. It’s dedicated fans like you that set an example of true devotion. We wish you and your teams the very best in 2016. We know for sure you’ll be there representing them and looking good doing it. What A Fan!
Fan Man