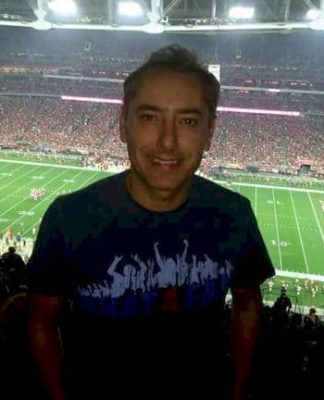 - Advertisement -
Meet Dennis Moss, a British born and current resident of the U.K. that decided to follow a dream to see a game at every NFL stadium. At the start of the 2015 season he began his journey. He first thought of the idea in Brazil after completing an eight month soccer tour that began in New York and ended in Rio at the 2014 World Cup. Dennis is a self proclaimed struggling musician. He wrote a song for NFL fans called “Like A Touchdown” which he hoped to get NFL stadiums to play during games and ultimately catch on in the United States. Inspired by the soccer trips experience, a last chance at a possible music career and his love for American football he began the year long process of preparing to visit every NFL stadium in one season. It would not be as easy as he expected… There would be many challenges to iron out; travel, accommodations, tickets, weather and transportation in each city he’d visit. Once he had the logistics worked out it was wheels up.

“I landed in Boston for my first game, the Patriots hosting the Steelers.” Dennis told us, “I almost never made it to the first game as I did not know that i could not take a bag with me onto the Patriots train or into the stadium itself. I almost went home after a mixture of jet-lag,  exhaustion, stress and anxiety. I somehow got through the first game and I was so shattered by the time I got back to my bed.” Dennis knew no one when he began this journey but met some of the biggest and most recognizable super fans that would become huge supporters of his mission. “I now have a big family of super fans who have helped me along the way,” said Moss. “These are special people and they have made my life, so much easier.”

Dennis would meet several interesting characters along the way. He even managed to secure an invitation to spend game day with the Jacksonville Jaguars owner, Shahid Khan, in his private suite. What we were most curious about was what did he think about the different stadiums, did he have a favorite? Here’s what he told us. “As a Cowboys fan I was always excited to go to the AT&T Stadium, which is probably my best stadium, not just as I am a Cowboys fan. I also liked Indianapolis and Seattle, which I found to be a very unique design and style for the NFL.

Lambeau has the history, but its not a “blingy” stadium, so i never really thought that much of it other than my respect for it. I’m not a big fan of the stadiums that are open, like Tampa and Miami, I prefer the bowl like stadiums and the ones that have a roof as ive been soaked more than a few times, in Charlotte, Miami and New York.”

Dennis accomplished his goal and decided to stay in the States to attend NFL Playoff games. He’s currently I Arizona and plans to attend his first Super Bowl. Dennis we salute you for your passion, devotion and dedication to sports. It’s fans like you that fuel our resolve to honor fans around the world for their contributions to sports, What A Fan!