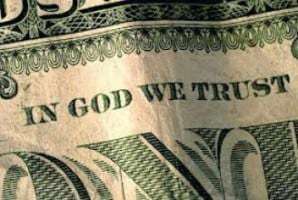 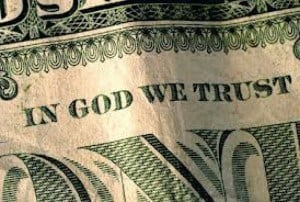 The Free Exercise Clause of the First Amendment states that Congress shall pass no laws prohibiting the free exercise of religion.  That statement is probably pretty clear to most of us, but the founding father’s attempt to secure a place for God/religion in the fabric of this nation, has met with considerable resistance over time.
Michael Newdow, 62, a California emergency-room doctor, and avowed atheist is attempting to have the phrase “In God We Trust” removed from American currency.  Newdow and 41 other atheist groups and individuals say the motto substantially burdens their religious freedom.

Newdow first came to public attention when he tried to have the words “under God” removed from the Pledge of Allegiance.  He hasn’t won any of his challenges yet, but inconsistent messages by the US Supreme Court keep him hopeful.

Back in the 1960s and ‘70s, the Supreme Court interpreted the Free Exercise Clause to mean that the government could not pass a law that “burdened” a person’s exercise of religion (Sherbert v. Verner, 374 U.S. 398 (1963); Wisconsin v. Yoder, 406 U.S. 205 (1972)). By the 1980s, however, the Court had shifted, and was saying that a little burden was actually okay, as long as the ban was “generally applicable” to all citizens, and only had an “incidental” impact on religious belief.

In 1990, the Court seemed to go even further, agreeing with the state of Oregon’s refusal to give unemployment benefits to two Native Americans who had been fired from their jobs at a rehab clinic after testing positive for the drug mescaline.  (Mescaline is the main compound found in the peyote cactus, which Native Americans have used in religious ceremonies for hundreds of years.  When Native Americans embraced Christianity, they brought this centuries-old practice with them in forming the Native American Church.)
The Court’s decision infuriated everyone– liberals and conservaties, Christians and Jews.  They all came together to lobby for new legislation to re-emphasize that any law that burdened religion was unlawful.  The Religious Freedom Restoration Act of 1993 (RFRA) was passed to accomplish this result.
Four years later, however, in 1997, the Supreme Court ruled that the RFRA cannot be enforced against the states– and can only be applied to any federal laws or actions that burdern religion.
With that backdrop, Newdow’s arguments might find receptive ears on the high Court. Why? Because it’s the same argument made in the case of Burwell v. Hobby Lobby, in Hobby’s successful 2014 challenge to the Affordable Care Act. In that case,  the Christian owners of Hobby Lobby claimed that under the RFRA, the government could not require them to provide certain health care services (i.e., birth control) to their employees because it violated their Christian faith to do so.  The Supreme Court ruled 5-4 in Hobby Lobby’s favor.
In the past, Newdow — who is also an attorney — has relied on the First Amendment’s protection against the establishment of religion. But this time, he’s basing his case on the RFRA, and if Hobby Lobby won its case, Newdow just might have a shot at winning his.
I freely admit to being biased in favor of “in God we Trust.”   It would be a sad day in America if Newdow won, but, then, hey, it was a sad day when they took prayer out of the schools, too.  Anything, unfortunately, is possible.